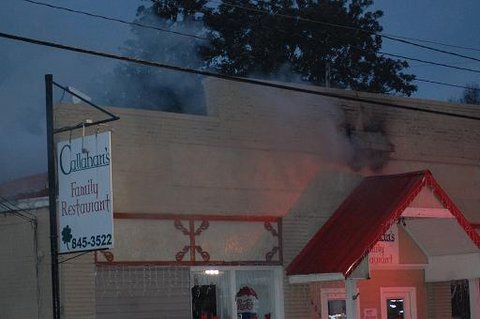 Piedmont, Wren and Powdersville Firefighters responded to a fire at Callahan’s Family Restaurant in Piedmont at approximately 6 p.m. Tuesday. Firefighters were on the scene as of 6:45 p.m. spraying water on the metal roof and attempting to extinquish flames in the kitchen area at the rear of the building. Smoke could still be seen coming from the roof. Owner Michelle Callahan said that employees and customers had gotten out of the building with no one hurt and that the fire may have started as an electrical problem. Heavy rain and wind made conditions at the scene more problematic as firefighters attempted to fight the fire. Heavy smoke also filled the air at ground level at times. Hwy. 86 remained closed while firefighters were on the scene. Pelzer EMS also responded.