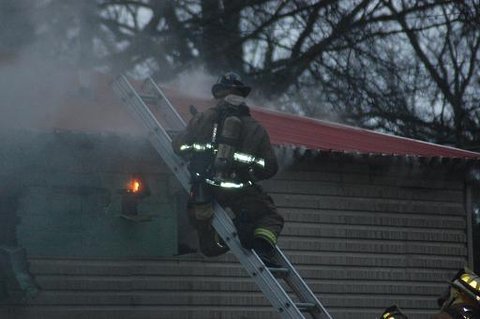 A firefighter cuts through the metal roof of Callahan’s restaurant as he attempts to extinquish a small blaze at the rear of the building Tuesday evening. The fire at Callahan’s Family Restaurant in Piedmont was mainly contained to the attic.

According to Piedmont Fire Department, the call came in at 5:30 and Piedmont Firefighters were dispatched and were first on the scene.

When they arrived, there was heavy smoke and flames coming from the attic space above the restaurant. The fire was contained to the attic and the inside of the restaurant had some damage from water used in fighting the fire, officials said. The building has a metal roof which also contained the fire. Heavy smoke and lights from a fire truck created an eerie scene as firefighters spray water on the building.