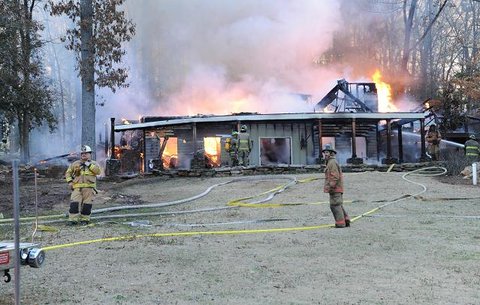 Firefighters on the scene of a structure fire Sunday morning on Cannon Bottom Road. Firefighters from eight area fire departments responded to a house fire  after being dispatched to a home on 240 Cannon Bottom Road in Belton around 7:15 a.m. according to Anderson County Fire Chief Billy Gibson. Gibson said flames destroyed the two-story home and the people who live there were not home when it happened. Neighbors said they heard loud noises that sounded like explosions. Gibson said a vehicle and gas grill were engulfed by flames. He said neighbors may have heard the tires and tank popping. Eightfire stations and about 45 firefighters were at the scene. Gibson said a firefighter who was on his way to work saw smoke and called in to report the fire.