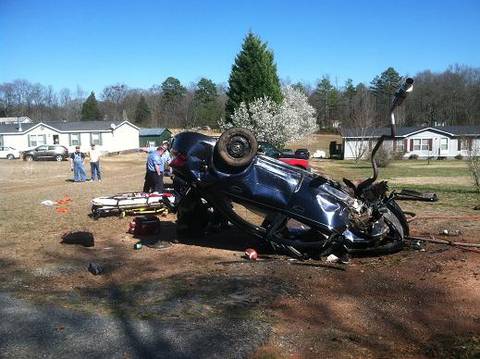 Two people were seriously injured in an accident on Willingham Road at approximately 4 p.m. Tuesday. According to officials a male and female were in the vehicle when it ran off the right side of the road, struck a concrete culvert, overturned and burst into flames. The man who’s house the accident happened in front of and a woman who was driving by, helped pull David Visoso, 18, of Belton from the vehicle.

According to reports Sexton heard the crash and saw flames. He brought a five gallon bucket of water to douse the flames, but it wasn’t enough as the flames continued to build and the two attempted to get Visoso out. They were unable to pull a young female from the wreckage. Once Whitefield Fire Department firefighters arrived, they attempted to extinquish the fire while others cut the car door to get the female out. She suffered severe burns and was flown by helicopter to Greenville Memorial Hospital. Williamston EMS transported the male to Anmed Health. Authorities are not sure who was driving the vehicle and the cause of the accident remains under investigation.