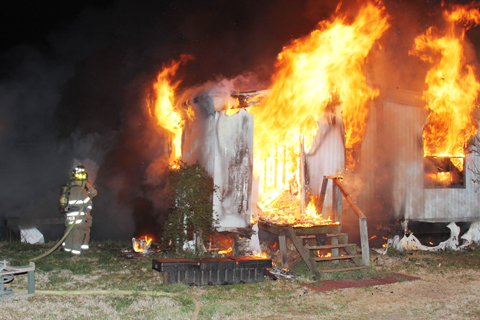 Firefighters from three area fire departments responded to a structure fire on Willingham Road around 6 a.m. Thursday morning.  Officials believe a clothes dryer was the cause of the fire which destroyed the home.

According to reports, Janine Sellers was asleep in the home at about 6 a.m. when her son, who lived nearby, saw a fire under the mobile home. The son rushed to the home and awakened his mother by beating on the side of the trailer. Sellers was able to get out of the burning home. Firefighters from Whitefield, Cheddar and West Pelzer Fire Departments helped bring the fire under control. The mobile home was completely destroyed. Belton EMS also responded while Williamston EMS was on another call. (Photo by David Rogers)