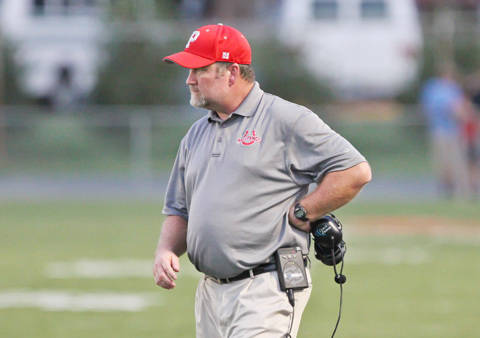 Palmetto Head Football Coach and Athletic Director Jody LeCroy officially announced last week that he is leaving Palmetto and School District One. LeCroy had coached football throughout his seven year stay at Palmetto, and served as head baseball coach for four seasons prior to this year.

He compiled an overall won-loss record of 37-39 on the gridiron, with the Mustangs enjoying the best showing during that time in 2010, when they won the Skyline Conference Championship and advanced to the second-round of the State 2-A Playoffs, finishing at 9-3.

His overall mark boasts the third-best winning percentage in school history, while also including five of the school’s overall 19 playoff games.

Palmetto moved up to Class 3-A at the start of the currentl school year, with the football team going 5-5 overall and 3-4 in the Western Conference, with one of those total and region wins coming from a forfeit by Daniel after it used an ineligible player in a 35-0 win over the Mustangs.

LeCroy was also the school’s head baseball coach, taking over a struggling program in 2009 and guiding it to a 79-33 overall record during a four-year span.

His 2009 team advanced to the State AA playoffs, with his 2010 club winning the District Tournament and reaching the Upper-State Semi-Finals.

The 2011 Mustangs won the Skyline Conference Championship and successfully defended their District Tournament title, advancing to the Upper-State Championship Finals.

Palmetto once again reigned as conference champions in 2012, and finished as the Upper-State AA Runner-up.

Palmetto High Schoolwas awarded the South Carolina High School League Sportsmanship Award in both the 2010-2011 and 2011-2012 school years, in recognition for its superb conduct in athletic competition.

In an interview with The Journal this week, LeCroy addressed his time at Palmetto:

What were your goal(s) as football coach and athletic director regarding your athletes, students?

Did you accomplish that?

Coach LeCroy – “As stated in previous interviews, I believe high school sports gives educators an avenue in which to teach discipline, commitment, moral values, and hard work,” LeCroy said. “My goal as the Head football coach and Athletic Director at Palmetto was to use this avenue and instill in our kids those things that make great citizens. Over the past 7 years at Palmetto, this has been accomplished.

When I arrived here 7 years ago, one of the goals was to improve girls sports at Palmetto. We put a priority on our girls programs to hire good coaches, improve facilities, and garner excellent support. The female athletes have competed for region titles and state titles. I would say this has been achieved.

As AD, I embarked on a journey to make Palmetto sports a family atmosphere throughout our coaching staff and players. If one could see the love these coaches have for the kids and the relationships that are fostered throughout our program on a daily basis, it would flabbergast you.

The dedication shown by the coaches and players is tremendous. That is evidence of a quality high school sports program.”

Were you satisfied with your record(s) highlights accomplished while at Palmetto in both football and baseball?

LeCroy – “Yes – Final records are for statisticians. You base success on being competitive. Out of the losses; only two came from teams that did not make the playoffs. We won a region title, only the 6th in school history. We beat BHP only the 7th victory in school history over that opponent. Football made the playoffs 5 of 7 years, which there have only been 19 playoff teams in Palmetto history. Many people do not realize that we played for first or second place going into the next to last or last game in the region in 4 out of the 7 seasons. The kids played their butts off. I can honestly say there has been two halves of football that I thought we didn’t compete as expected, Abbeville 2006 and Crescent 2012. Other than that, you couldn’t expect anything more.”

LeCroy – “Yes – Baseball won three district championships and two region championships. We have sent around 12 to college. We have had 5 make the high school all star game. And have had over 20 spots filled by Palmetto kids on the All Region teams. Two Region Players of the year and 6 All State players. But once again don’t go by stats. The young men worked their tails off and have represented the Palmetto Community well.”

Coach LeCroy added – “I have been told by other coaches that we competed against that this has been the best coaching staff in Palmetto history. We had 3 assistants that were former head coaches, one assistant who had been a coordinator at the 4A level, one former college coach, and several others who had been head coaches in other sports. These assistants have worked harder than any other staff in the history of the school. I WILL PROMISE YOU, WE DID NOT GET OUT WORKED AT PALMETTO!”

During your time at Palmetto, what stands out as a highlight(s) for you?

Coach LeCroy – “Many people think highlights are coaching awards and winning titles. I however would say my highlights were watching the kids grow. Seeing kids improve to meet goals they established, improving their attitude, and obtaining skills that will enhance their careers and families one day is what coaching is all about. The biggest highlight to me is when the kids hug you after their last game and thank you for all you did and tell you they love you. They graduate and come back from college or the workplace and you see the coaching you gave them has made a difference. That is my highlight, period!”

Did you get good fan and booster support?

Coach LeCroy – “The booster club has been great to work with. We went from 6 members on our board the first year I arrived to now 20 full seats. They have the best interests of the students in mind and have really worked hard in these bad economic times. This group unselfishly raised thousands of dollars for travel and equipment. Their work ethic had to increase with little to show when the district budget was cut, I have no complaints here, CLASSY PEOPLE.

As for the fans, we always had great support at our games whether home or away. Sure some are going to be disgruntled, but that happens at every school at every level. I look at the fans that understand sports, played sports, and have been through the “grind”. Most of these people understand the sacrifices and hardships that happen during the season. They also understand your obstacles that hinder winning. I felt tremendous support from this group for our program.”

Why did you decide to leave District One now?

Coach LeCroy – “Ultimatum to have a winning season and if not my AD/Football contract would not be renewed the following year. Got to feed your family!”

It has been said that administrators stressed a need for the football program to achieve greater success and there was an ultimatum to win six or more games – Was there pressure from the District One Administration for you to improve winning seasons?

Was this the reason you decided to leave?

Coach LeCroy – “Yes- I did not believe that neither the players nor the assistant coaches should have to go through a season with that over their heads. People do not understand the hard work these two groups put in during the year. Their experience should be exciting and fun and should only focus on competing and representing their school at the best level possible. It is high school football. You are teaching more than winning, you are teaching life skills.”

Have you been offered a new job and where?

Will you be coaching either football or baseball at your new position?

If you have a statement or anything to add on anything else, please feel free .

Coach LeCroy – “I WOULD LIKE TO SAY A THANK YOU TO ALL WHO HAVE SUPPORTED THE KIDS, OUR COACHES, AND ME DURING THESE SEVEN YEARS. I WOULD NOT CHANGE A THING. THE EXPERIENCE HAS BEEN AWESOME. I WOULD LIKE TO SAY THANKS TO ALL THE STUDENT ATHLETES WHO IN MY OPINION ARE WINNERS REGARDLESS OF THE SCORE OF A GAME. YOU HAVE REPRESENTED PALMETTO WELL. GO MUSTANGS!”