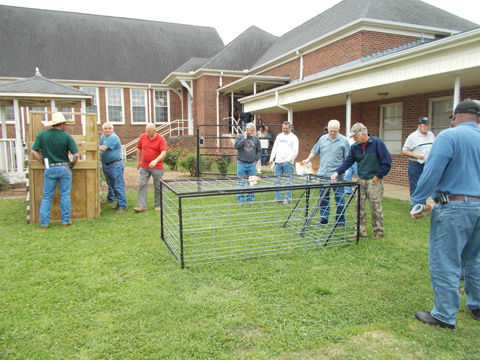 Approximately forty Anderson County farmers and cattlemen gathered at the Williamston Municipal Center last week to seek advice on how to deal with feral hogs and the extraordinary damage they do to agriculture.

“Wild or feral hogs do tremendous damage to agricultural interest in our state,” said Noel. “Nationwide, the damage done to crops and livestock, added to the cost of control efforts, totals approximately $1.5 billion. When you scale that number down to account for South Carolina’s 150,000 wild hogs, the cost is tens of millions of dollars. And it is likely to get worse”.

Since 2003, not only has the range of wild hogs expanded to include every county in the state, but the population has approximately doubled. One man present at the meeting reported that he and his friends had killed more than three dozen hogs on his farm last year. Another reported that hogs were attacking and killing his calves.

In response, Clemson University and a variety of other agencies, such as DHEC and DNR, as well as federal agencies, have formed the S.C. Wild Hog Task Force. Noel stressed that only a coordinated, statewide effort has any chance of success. Despite very liberal hunting of the hogs, requiring only a standard state license, with no bag limits or closed seasons, the wild hogs simply breed too efficiently to be controlled just by hunting.

Sexually mature as early as four months, and producing both large litters and several litters a year, wild hogs are a prodigious challenge. Education, research, and cooperative efforts are keys to the task force’s approach. Noel and Byrd demonstrated a number of traps that can be used to capture a single sow and her brood up to twenty or thirty hogs at a time.

Wilson said that several farmers in her district had experienced significant problems due to wild hogs, but the presentation drew people from all over the area, including some from Pickens and Oconee counties as well.