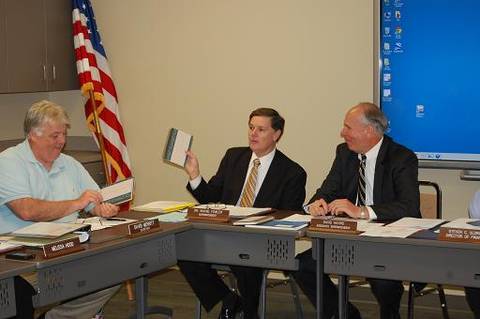 The Board meeting was his last as District One Superintendent, a position he has held for the last nine years. After approving the 2013-14 school year budget and personel recommendations, the board honored Dr. Fowler with two items.

The Board unanimously approved naming the conference room at the District One offices in Williamston the Dr. Wayne Fowler Conference Room.

Board Chairman Fred Alexander said, “This Board appreciates you more than you know for all you have done for School District One students. That is one reason we are the number one school district in the state.”

Board member Nancy Upton honored Dr. Fowler by singing a song with lyrics tailored to his retirement. The Board then presented a portrait of Dr. Fowler that will hang in the conference room dedicated to him. The portrait was painted by School District One Art teacher Thomas Addison.

Dr. Fowler led the district through a $85.75 million bond referendum in 2008 resulting in the completion of the new high school in Powdersville and all schools receiving additions, renovations or safety and security upgrades in all buildings. Improvements were also made to athletic facilities.

During his time as Superintendent, student achievement has risen steadily and test scores have been among the best in the state. State district report cards have consistently been “Excellent” and under the new federal accountability system the district received an A grade.

Following the meeting Alexander said, “I hate to see him retire. He has been so good to the school district and interested in the children. It has been a pleasure serving with him.”

“Under Dr. Fowler and the school board’s leadership, the district has maintained an “Excellent” report card, improved school facilities, enhanced technology, and provided sound and prudent decision-making throughout the budget process,” Havird said. “Part of my responsibility will be to make sure there will be a smooth transition and keep the district’s focus on continuous improvement in these areas.”