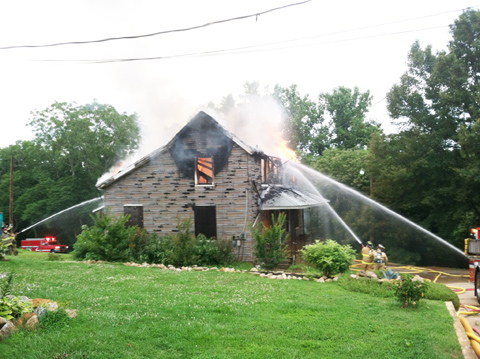 Firefighters direct water underneath a house on Park Row in Piedmont Sunday evening after the home caught fire. When Piedmont firefighters pulled out of their station one minute after receiving the call heavy black smoke was billowing into the air from the fire. The house was vacant and the windows and doors were boarded up. Firefighters arrived on the scene and fought the fire from the outside since the entire roof and upstairs was engulfed in flames. Wren firefighters assisted Piedmont and Pelzer EMS stood by as firefighters fought the blaze.The cause remains under investigation. (Photo by David Rogers)