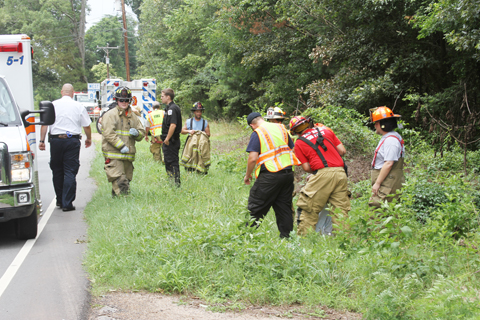 Firefighters help walk an elderly woman to an ambulance after she walked away from her home. She was reported missing near Piedmont Saturday afternoon. Initial reports were that she had been missing since Friday night. A Wren firefighter saw a woman fitting her description walking along Highway 86.

After the Wren Fire Department was called out along with Pelzer Emergency Services, and the Anderson Technical Rescue Team, the firefighter began searching a wooded area near where he saw the woman. A few minutes later the woman was discovered crouching down in the wooded area. Paramedics checked the woman who had minor cuts and scrapes and was not sure if she would be taken to the hospital. (Photo by David Rogers)