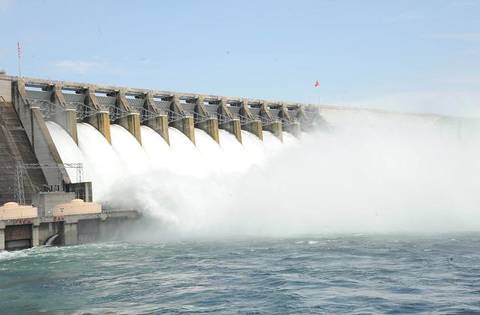 Water rushes through 12 spillway gates at the U.S. Army Corps of Engineers’ Hartwell Dam on July 9, 2013. The Corps activated the spillway gates to release excess water after heavy rainfall the night before caused the reservoir to reach its maximum flood storage capacity of 665 feet per mean sea level.

During peak discharge, the Corps released 74,000 cubic feet per second (cfs) of water through the Hartwell Dam. This amount includes 32,000 cfs passing through the five turbines (for hydropower generation) and 42,000 cfs passing through 12 spillway gates. Other than routine spillway gate tests, it was the first time the spillway gates had been opened at the Hartwell Dam since Aug. 18, 1994. The only other occasion was on March 8, 1964.