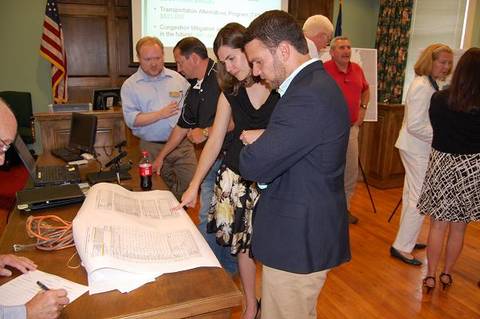 The goal of the meeting was to identify any additional projects from the Williamston/Pelzer/West Pelzer area that should be brought into our long-range plan, according to Tiffany Wedmore, AICP Transportation Planner with GPATS.

A number of Anderson County planning officials were also at the meeting.including Steve Newton, Holt Hopkins and Bill West.

Projects mentioned during the drop-in format meeting included work on US Hwy. 29, bridges on Hwy. 29, the Cherokee Rd. interchange and bridge.

Willamston Mayor Mack Durham said that local projects he wants added to the Long Range Plan include a sidewalk along Minor St. from the Municipal Center to the school area, bike lanes along Hwy. 20 and bike/walking trails in and around Williamston and the Pelzer/West Pelzer area.

The Powdersville area, which has been in the GPATS region for awhile, already has a project on the list for Hwy. 153 near Cooper Lane to I-85. Also on the list is a project to widen West Georgia Raod from Neely Ferry Road to Fork Shoals Road.

Projects can be related to any form of transportation including highway, sidewalks or trails for walking, biking, etc.

GPATS is the organization that handles regional transportation planning for the Greenville area which includes the surrounding “urbanized area” according to the U. S. Census. Based on the 2010 Census, the Greenville urbanized area was expanded to include several new areas, including Williamston, Pelzer, and West Pelzer. These three towns officially became a part of GPATS in March 2013.

Long Range Projects in the Williamston/Pelzer/West Pelzer now fall into the expanded GPATS planning area. The GPATS organization updates long-range plans every five years, and are at the tail end of that update cycle now, according Wedmore.

“We had started the update about two years ago, long before the new areas were brought into GPATS,” Wedmore said. “Our goal with these meetings is to identify any additional projects from the Williamston/Pelzer/West Pelzer area that should be brought into our long-range plan,

When projects are brought in, they are evaluated and ranked in importance based on several factors.

Wedmore said GPATS is hoping to get final approval on the long-range plan in September.

If you didn’t make the meeting and have transportation concerns, GPATS will accept written comments from those who would like to suggest specific projects. For more information go to www.gpats.org.