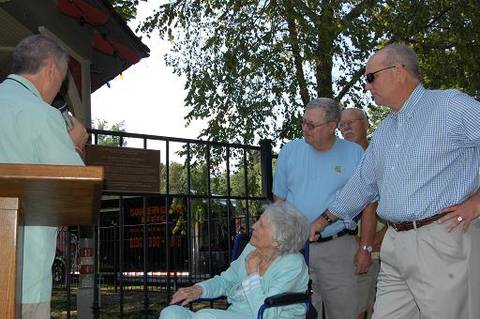 A special ceremony was held during the Spring Water Festival Saturday honoring the late Dr. Dwight H. Smith. A plaque dedicating the Mineral Spring Gazebo in his memory was unveiled by Williamston Mayor Mack Durham (left) as Smith’s wife, Miriam, son King and Williamston Councilmen Otis Scott and David Harvell look on. Family, friends, former patients and staff who worked with Dr. Smith were present for the special event.

The plaque reads: The Town of Williamston hereby dedicates this Mineral Spring Park Gazebo to Dr. Dwight Hazelton Smith, December 13, 1921 – June 13, 2006. “Dedicated Doctor, Community Servant and Friend To All. He was ever mindful of the healing properties of the Pure Spring Water that has never failed to flow from its source.

He promoted its consumption and partook of its yield regularly. In Memory and Celebration of a Life of Service and Dedication to His Community we Generously offer this Water to all who may partake and wish each one Health who consumes its quenching flow. Given by the Citizens of Williamston, Presented by the Williamston Area Historic Commission 2013.

According to his wishes, the beloved Williamston doctor was buried at a private Ceremony of his Life at Travis Cemetery in his hometown of Saluda SC. Family members said he left specific instructions for his burial. Family said he was buried in his scrubs with a replica Furman football helmet adorning the top of his final resting place.

Dr. Smith was a “Country Doctor,” giving advice on a number of topics in his column which appeared weekly in The Journal. He was very much a part of the community, serving a number of years as volunteer physician for the Palmetto High Athletic Department. He sometimes played piano for services at Beulah United Methodist Church.

As a Family Practitioner, he received a number of awards. In 1998 he was awarded the Order of the Palmetto by S. C. Governor David Beasley for his devotion to the practice of family medicine.

In April 1999, he was recipient of Furman University’s highest honor, the Bell Tower Award.

The Medical University of South Carolina named a room for Dr. Smith at the Family Practice Center, and another at Sebring-Aimar Alumni House.

Dr. Smith was a familiar sight in town, wearing his green scrubs as he pedaled his bike to and from his office daily and to the spring with bottles for the precious spring water. He was an advocate of the health-giving qualities of the Mineral Spring.