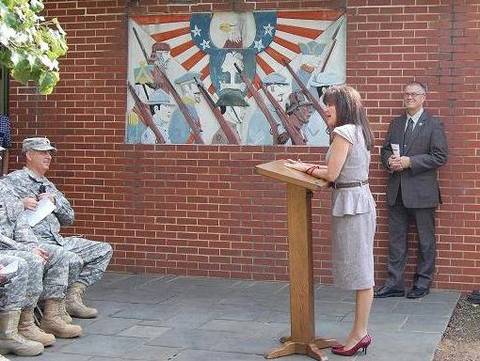 The Williamston National Guard Armory has officially been turned over to the town. State House Dist. 9 Rep. Anne Thayer, who sponsored a resolution in the House of Representatives which allowed the return of the property, spoke during a ceremony Wednesday that included a contingent of Guard, state, county and town representatives, as well as the public. “This is so rewarding to see something like this come together. It is a very useful and well maintained facility and I am sure this community will put it to good use,,” Rep. Thayer said.

District Seven County Council member Cindy Wilson said the acceptance of the facility by the Town was a “sign of a resilient community moving ahead. It was good to see the teamwork involved in making this happen.”

Sen. Billy O’Dell, who shepherded the Senate version of Thayer’s resolution through the Senate, was unable to attend due to a scheduling conflict, but Mayor Mack Durham acknowledged his assistance. “Senator O’Dell has always been a friend and supporter of Williamston and that was certainly the case in this instance.”

Williamston Mayor Mack Durham thanked Lt. Col Andrew Batten, who represented the SCNG, and assured him that Williamston would always remember and honor the place that the Guard and the armory have in the Williamston community. “This building has been here for as long as I can remember. It is good to know that it will continue to serve Williamston and her people, even though it will be in a different capacity.”

Lt. Col. Batten also recognized the special relationship between the Town and the Guard. “Williamston always supported both the Guard as a unit, and those who served here. It was because of that special relationship that Adjutant General Robert Livingston, Jr. was so happy to see this facility returned to this community.”

The building sits on approximately 7.4 acres.is adjacent to the town’s Mineral Spring Park and other recreational areas. Mayor Durham has stated that he hopes the armory building can become a Cultural Center for the town and area.