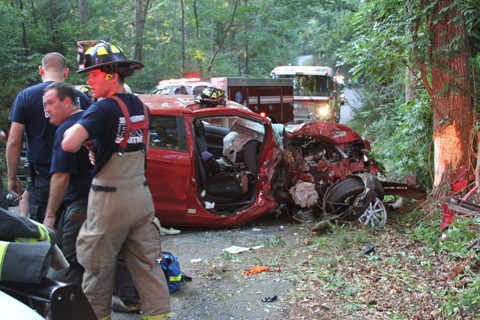 A 92-year-old woman died after the car she was riding in left the roadway and struck a tree Tuesday afternoon. According to Greenville County Deputy Coroner Mike Ellis, Esther Keene, of Pelzer was a rear seat passenger of a vehicle traveling on North Flat Rock Road near Owens Road, when it left the roadway. According to Ellis, Keene was pronounced dead at 6:40 p.m. at Greenville Memorial Hospital. Keene died from blunt force trauma to the body, according to Ellis. South Greenville firefighters assisted Greenville County EMS and Pelzer EMS at the scene. (Photo by David Rogers)