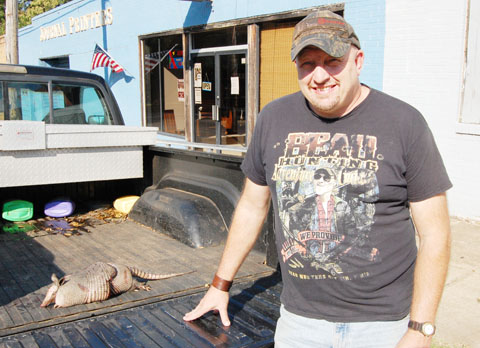 Armadillos in area – Ranny Knight of Williamston came across this nine-banded armadillo, which had apparently been hit by a car, on a street just inside the Williamton Town limits. The sighting of the medium sized mammal is rare in the upstate, SCDNR officials said.

According to Brett Witt of South Carolina Department of Natural Resources (SCDNR), the creature found by a local resident near Williamston is a nine banded armadillo which is uncommon in the Upstate.

“Over the last 20 years or so they’ve pretty much swept across all of SC,” Witt said. “That being said, they are somewhat rare in the Upstate and predominantly are in the Lowcountry.”

According to Witt, nine-banded armadillos are generally insectivores. They forage for meals by thrusting their snouts into loose soil and leaf litter and frantically digging in erratic patterns, stopping occasionally to dig up grubs, beetles, termites, and worms, with their sensitive nose.

They then lap up the insects with their sticky tongues. Nine-banded armadillos have been observed to roll about on ant hills in order to dislodge and consume the resident ants.

When asked if armadillos eat fire ants, Witt said, “While we don’t have direct evidence they consume fire ants it would follow that they do. I am told by one of our biologists it’s more likely they would eat the larvae. They also occasionally eat berries and bird eggs.”

The nine-banded armadillo is a solitary, mainly nocturnal animal, and resembles a possum. It can be found in various habitats, from rainforests to grassland and dry scrub.

The armadillo can jump 3 to 4 ft straight into the air if sufficiently frightened, making it a particular danger on roads.

The armadillo can be found throughout the southern United States and is gradually mirgrating north officals said. It is the state small mammal of Texas.

It is very common in Central and South America, making it the most widespread of the armadillos.

Witt offered another note of caution. “It should also be noted that, while rare, it is possible to contract leprosy (Hansen’s Disease) from contact with armadillos.”