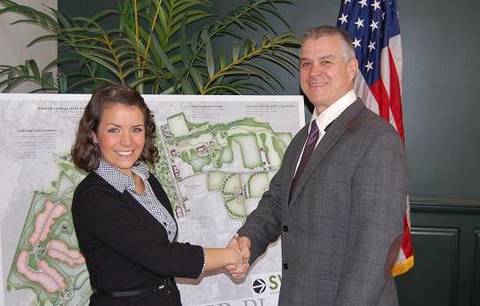 Williamston’s new Main St. Program Director Caroline Alex is excited to be chosen to head the economic revitalization program. Local officials and business people are also looking forward to getting the program underway with the hope that it will be a new beginning for the town. Alex was in town last week,. meeting with the mayor, filling out paperwork and preparing for her first day on the job. She will officially start the position Dec. 2.

While finishing her thesis for a Masters Degree at the University of Georgia, Alex has also been in the process of looking for housing in the area making plans to become a resident of Williamston.

In an interview with The Journal, Alex was asked, as a new person coming in, her perception of the town.

Her response – “It is already united, and engaged, and committed,” She said. “And they care.”

Alex said, “There are a lot of smaller towns that have a huge battle. They don’t work together. The Williamston area works together very well. The towns representatives are united as they should be. This gives Williamston a head start.”

Alex said the town has a lot of potential and the area has history to build on.

“The town has a lot still here,” she said, referring to the physical buildings and space. “It just needs some TLC. Williamston has lot still here.”

Mineral Spring Park and the layout of the town are a part of that and having residential areas around a future arts center and parks are also positives, according to Alex.

“The community has green space. The founder (West Allen Williams) saw to that. There are schools, churches and community space. You can see the integrity is still here.”

Alex said the town’s original layout is fairly well intact. “There is a lot of potential still here and to build on that.”

The Main Street Program she is heading will focus on all of the areas Alex mentioned.

The Town signed on to a three year committment with the program which is offered through the Municipal Association of South Carolina.

During an early presentation on the program, Beppie LeGrande, who coordinates the program for the SC Municipal Association, said that the first year is generally spent in building the organization of the local program. “We will focus on helping you folks harness the ideas you have to shape the approach you want to take,” she said.

As the Williamston Main St. SC program director, Alex will attend training sessions with the state Municipal Association and work with local officials and others in the community to reach the goals that are established for the program.

Alex said she is very excited about the opportunity to use her degree and to work on the Williamston Main St. Program

She said she is looking forward to using the historic physical elements of the town, which she described as Victorian oriented, and bringing that into signage and other design elements which will be used in the promotional part of the program.

Alex said she is also excited about moving to Williamston and learning more about the things and places in the area. She said she is also looking forward to meeting people in the community and building relationships with them.

“I am looking forward to meeting everyone in the community and working with the town,” Alex said.

Williamston Mayor Mack Durham said, “I couldn’t be more excited. My opinion is that Caroline is the perfect person for the position and I believe the Main St. program is the best opportunity our town has seen in years.” Durham added, “With the support of our community, there are many possibilities.”