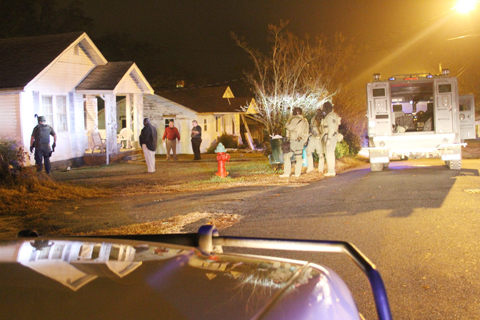 The Williamston Police Department, Anderson County Sheriff’s Deputies and Anderson County SWAT team were involved in a joint operation late Wednesday night in which several indivudials are facing multiple charges related to burglaries in the area.

According to Williamston Police Chief Tony Taylor, Williamston police officers stopped a vehicle fitting the description of a report of someone shooting from a vehicle.

Upon stopping the vehicle, the driver gave permission to search for weapons. During the search a laptop computer and other items were found in the vehicle, Taylor said.

Upon further investigation, a name and email that came up on the laptop was not the person driving the vehicle. Chief Taylor said officers emailed the address and the response they received was that the computer was stolen. Taylor said other items in the vehicle were related to two burglaries that had occurred in the county recently.

At that point, Anderson County Sheriff’s Office was notified and a joint operation was put into place involving two residences in Williamston and additional suspects, Chief Taylor said.

The Anderson County SWAT team was also brought in due to several weapons that were stolen during the two burglaries. Taylor said the did recover some of the stolen guns during the operation which involved a house on East Caroline St. and another on Market St. in Williamston.

Chief Taylor said the individuals involved are facing multiple charges for burglaries in the Pelzer and Williamston area. The investigation is ongoing, he said.