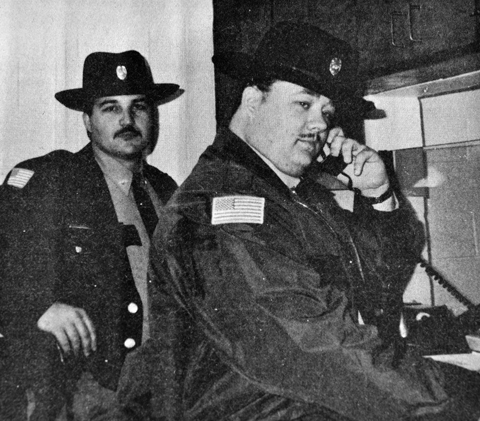 Steve Clardy wanted to be a sports trainer when he was younger, and pursued the certification through Clemson University. His high point was serving as a trainer for the 1981 Shrine Bowl squad. But eventually, the law enforcement tradition in his family, as well as life’s circumstances, led him into a law enforcement career that will end on Dec. 31, 2013, following twenty five years of public service.

“My grand uncle, Clarence Hammond, was police chief of Piedmont until 1976, so I was always kind of influenced in that direction. Then, I got a security job at Milliken while I was still in high school. One day, a police officer approached me about joining the force, and my life changed direction,” said Clardy.

Clardy served under Mayors Middleton, Sr., Clardy, Crout, and Durham. He served under police chiefs Turner, Martin, Baker, Inman, and now Taylor, as well as several interim chiefs who came and went during periods of political turmoil in the town.

Through it all, Clardy, whose brother Phillip was one of the mayors, managed to keep his head down and do his job, which involved duties at the dispatch desk and in prisoner care. But late in his career, he became a casualty of the political turmoil, and was let go with just a few months remaining before retirement.

Clardy was restored to his position at a level sufficient to let him complete the full twenty five year tour of duty, and receive his full benefits. “I really appreciate the current administration and chief working with me and each other to let me receive the retirement I feel like I deserve and earned. It makes a big difference to me to be able to say I finished twenty five years.”

Clardy said the current force, under Chief Tony Taylor, is an experienced one, which is constantly upgrading their training. “The emphasis on community is very important too, because if we aren’t serving the community, what is the point, really?

Clardy was hired by the Town of Williamston on January 12, 1987. His last day at work will be December 31, 2013. A Retirement ‘Drop In’ will be held at the police department on December 31, from noon until.

Former and current officers, employees, and friends are invited to stop by to give Clardy well-wishes.

Clardy is accredited by the South Carolina Criminal Justice Academy and has received numerous awards and certificates of achievement over the years.

He has occupied several job “titles” and duties during his career at the Williamston Police Department and is most known as the dispatcher working the front office.

Williamston police officer Steve Clardy will be retiring at the end of the year. Pictured is Clardy and Officer John Allen just after Clardy was hired by theWilliamston Police Department in 1987.