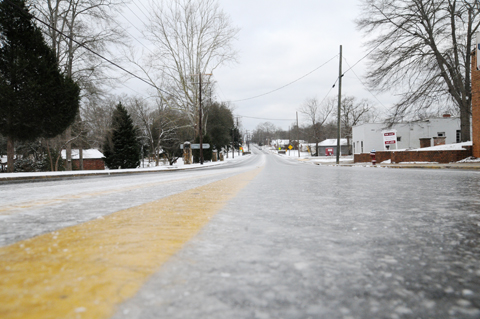 SC Hwy. 20, West Main St. in Williamston was a solid sheet of ice Wednesday morning. Many of the main highways including Hwy. 8, US Hwy. 29 and Hwy. 86 had similar conditions until the sun came out later in the morning. Snow and ice on area roadways resulted in numerous accidents throughout the area Tuesday evening and into Wednesday morning.

A winter snow storm that blanked the area with 1 to 2 inches of snow and some ice closed schools, businesses and government offices while creating hazardous conditions for motorists.

As of early Wednesday morning, South Carolina Highway Patrol officers had responded a 1240 incidents related to the weather event.

Locally there were several accidents reported on US Hwy. 29 and other roads and highways in the area on Tuesday night and into Wednesday morning. Several of the accidents resulted in vehicles on their sides, officials said.

Williamston Police Chief Tony Taylor said his department had several minor traffic accidents related to the weather but nothing major.

On the state level, the South Carolina Emergency Operations Center was activated at Operational Condition 3 during the weather event. OpCon 3 is the state’s preparedness level when a disaster or emergency situation is ongoing. The SEOC were also on standby to support county emergency management directors if first responders needed additional resources.

The South Carolina Emergency Management Division (SCEMD) and members of the State Emergency Response Team along with police, fire and other emergency responders had plenty to deal with once the winter weather conditions arrived including numerous accident and fenderbenders.

The South Carolina Department of Transportation issued these stats as of 8 a.m. Wednesday:

SCHP personnel continue were also assisted by officers from the State Law Enforcement Division and the SC Department of Natural Resources.