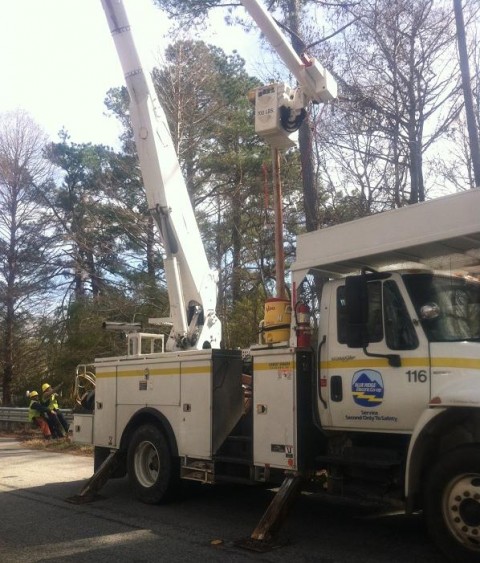 While the upstate generally dodged a bullet in terms of problems with last weeks winter storm, people in the mid and  lower parts of the state were not so lucky.

Blue Ridge Electric Cooperative employees and contractors spent about 18 hours on Wednesday and Thursday repairing outages resulting from the massive snow and ice storm that assaulted the Southeast. By Thursday afternoon, stability had returned to the Blue Ridge system. After their enjoying a few hours of rest, 79 workers were then dispatched to assist electric co-ops in lower South Carolina that were hit very hard by this weather event.

The co-ops who were recipients of this aid included Berkeley Electric (Moncks Corner), Coastal Electric (Walterboro), and Edisto Electric (Bamberg). Blue Ridge sent 27 of its own linemen and support personnel, as well as 16 contract linemen and 24 right-of-way maintenance contractors. Rounding out the group were 12 linemen from Jackson Energy Cooperative in McKee, Kentucky, who had initially helped Blue Ridge with its own storm-repair efforts.

According to reports from around South Carolina, electric utilities from the Midlands to the coast had suffered extensive devastation from the storm’s wrath. These power suppliers are now confronted with numerous broken poles and power lines on the ground, plus untold numbers of toppled trees in need of removal. Some estimates have suggested it could take up to three weeks before everyone’s electric service is restored.

Blue Ridge President and CEO Charles Dalton explained that sending help in time of need is a cooperative principle. “Cooperatives believe in helping one another. On previous occasions, Blue Ridge has been in desperate situations similar to this present one, and our fellow co-ops have always stepped forward to assist us. Returning the favor is the very least we can do.”

Dalton added that he was thankful the storm had created only scattered problems on the Blue Ridge network of power lines. “We are indeed grateful that none of our members suffered a prolonged outage this time around. The forecast is calling for calm and unseasonably warm weather for the immediate week ahead. Therefore, we’ve retained what should be an adequate number of linemen and other operations employees to maintain quality service here while our other employees are serving elsewhere.”