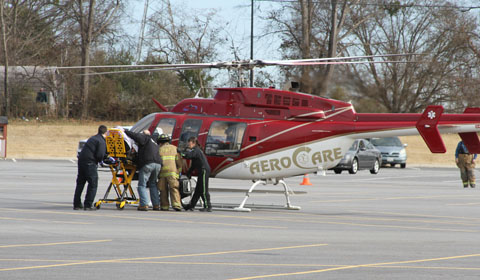 Two men were flown from MD 360, a division of Baptist Medical Center Easley in Powdersville  on Saturday morning to the Joseph M. Still Burn Center in Augusta. The two were brought there in a truck around 10:30 a.m. Pelzer EMS was called, arrived and assessed the patients. It was determined they were serious enough to be flown to the burn center. Two medical helicopters were called to the scene. Powdersville firefighters responded to the location and set up a landing zone in a nearby parking lot for the choppers. Both men were flown directly to the Augusta burn center. Authorities said that the men told them they had been working on a gas line on White Horse Road in Greenville County and it exploded, burning them. (Photo by David Rogers)