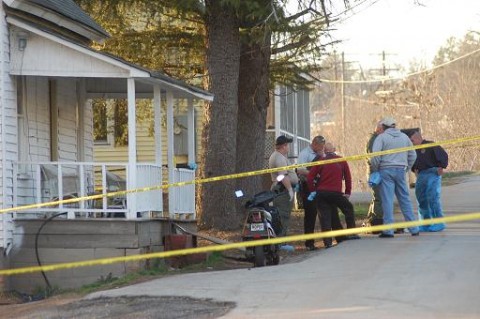 Investigators at the scene of a shooting in Pelzer in which three people are dead.

A suspect is in custody after three people were killed in a shooting at a home in Pelzer around 2:45 pm today (Wednesday). According to Anderson County Sheriff John Skipper Jared Michael Williams, of Williamston, was arrested following a man hunt and chase that ended in Piedmont at approximately 5 p.m.

The incident began when Williams went into a home on Law St. inPelzer, confronted three people and fatally shot them. A fourth victim was injured but managed to exit the house and go to a neighbor for help.

Sheriff Skipper said shortly after responding to the shooting scene in Pelzer, the sheriff’s office began looking for a pickup truck Williams may have been in when he left. Authorities were able to locate the stolen truck with the help of a Greenville County Sheriff’s Office helicopter.

Deputies chased the truck in Anderson County for 15 to 20 minutes before it went onto Timms Road just off Hwy. 86. There the suspect jumped out of the vehicle and ran through the woods, according to the sheriff.

Skipper said the suspect then stole a second truck at a nearby construction site and the chase continued onto Hwy. 86 in Piedmont.

According to witnesses, Greenville County Sheriff’s Deputies attempted to stop the vehicle with spike strips on Hwy. 86 in front of the Piedmont shopping center where H&R block and the Piedmont library are located. The suspect fired shots at the deputies as he approached.

The strips did not stop the vehicle which continued toward Piedmont.  The truck crashed into a car and then into a house at Hammett St. on Hwy. 86 near Hwy. 20 in Piedmont. According to reports, the suspect was pulled from the wrecked truck by numerous officers and there was a physical altercation. Williams was arrested and placed in a Greenville County EMS ambulance then transported.

Hwy. 86 was closed to traffic for some time while authorities investigated the wreck scene in Piedmont.

The Anderson County Sheriff’s office obtained a search warrant for the house in Pelzer and were processing the scene Wednesday. The incident remains under investigation.