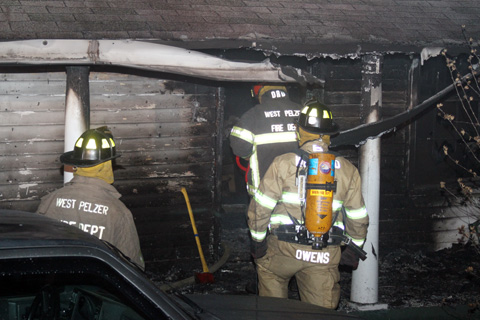 West Pelzer firefighters work to extinguish hot spots following a house fire late Monday night. When firefighters arrived at the house on Parker Street in Pelzer flames were coming from the front door and windows. The fire was brought under control in about 5 minutes, but not before the home was heavily damaged by fire and smoke. The occupants were able to escape, however Pelzer EMS treated one for breathing difficulty. Wren firefighters stood by at the West Pelzer station until the West Pelzer unites were available. (Photo by David Rogers)