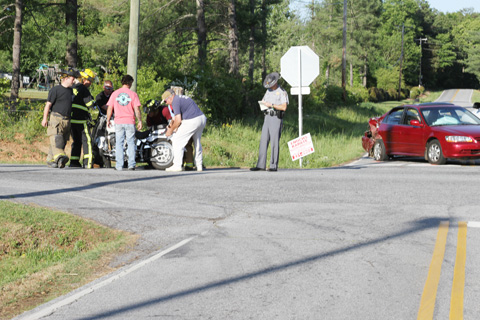 A Williamston businessman was seriously injured in a motorcycle accident on Saturday afternoon. According to reports, Frank Major was driving a Harley Davidson motorcycle on Crestview Road when he collided with a Honda car at the intersection of Vandiver Road. He was taken by Medshore Ambulance Service to AnMed Health. Hopewell firefighters assisted ambulance workers at the scene. The accident is under investigation by the SC Highway Patrol. The accident happened behind T. L. Hanna High School. (Photo by David Rogers)