During their meeting Tuesday, the Anderson School District One Board of Trustees unanimously approved first reading on the 2014-15 school year budget. As approved, the budget has anticipated revenues of $60,160,887 with expenditures of $60,687,117. The $526,230 deficit will be made up from the District’s reserve fund.

According to Superintendent David Havird, the District’s fund balance currenly stands at $9,790,926. That is about two months of expenses for the district and within two to three months reserve recommended by auditors.

Havird said there is a possibility of lowering the amount needed from the reserve fund by $300,000 to $330,000 if the state decides to allow flexibility on technology funding.

Currently the funding is for equipment and training and some schools are asking the state to allow it to be used for personnel also.

The amount needed could also be affected depending on whether the state provides funding for new students.

The budget does not account for expected growth of 90 to 100 students according to Havird, because the state has not provided additional funding for new students in the past.

In addition to local funding already provided, revenues in the District One School budget is based on a limited tax increase and other state funding.

The budget does include the state allowed increase for inflation using the Consumer Price Index (CPI) and growth under Act 388, which will increase taxes for business owners, commercial and industrial properties and automobiles.

CPI and population growth of Anderson District One is 1.46 percent and 1.09 percent. Under Act 388, the district can increase the millage rate by the combined amounts or 2.55 percent. This will generate an additional $321,162 for the District, Havird said.

The state is allowing $39 million for elementary school reading coaches,(schools with low state test reading scores will have the position fully funded.) District One will get fifty percent funding for their reading coaches.

The state is providing $4.5 million to schools across the state for summer reading camps.

There is $30 million in lottery funds available for statewide technology improvements in schools (with a weighted distribution); $12 million for digital instruction materials; $17.7 million for a charter school district and $12 million for school bus purchases by the state.

Changes in the EIA weighting funding formula will result in District One receiving an additional $1,131,153 however the district will see a decrease of $352,997 in EIA funding for high achieving students and a decrease of $589,843 for EIA students at risk.

After the changes in the Federal/State funding, District One will receive $188,313 more from the state than last year.

The district will have to match the funding for reading coaches to provide salaries for the seven positions that are required. (Concrete Primary in not included in the funding formula.)

A state mandated two percent cost of living raise for employees, added a significant cost of $720,000 to the the budget.

Revenues for the budget are also tight due to the base student cost, which remains funded by the state at the 2002-2003 level.

The base student cost is currently $2120, which Havird said went up by $19, but is still below the EFA mandated $2742 per student it should be funded at.

The district has expected enrollment of 9,121 students in K5-12.

Havird said the budget is “A reasonable budget and is as good a shape as possible.”

The superintendent said, “The last several years have continued to be a challenging time to have a proactive and effective operating budget.”

The two primary items affecting the budget include the state providing only a slight increase in the base student cost and the state mandated employee raise which Havird said, “have made it really difficult to balance the budget.”

“Our board did a real good job to mitigate the state increases by effectively using the fund balance to provide a reasonable budget to offer the best instruction and academics for our students, with an emphasis on technology,” Havird said.

The budget will be presented to the county board on June 12. 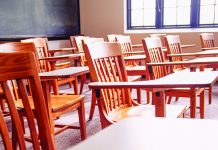