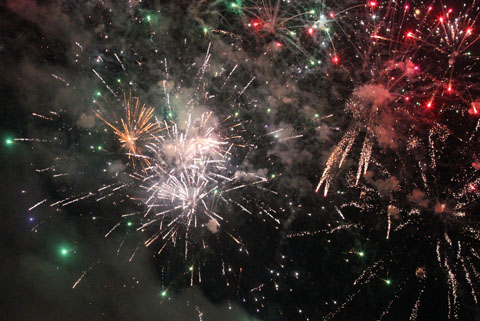 Williamston’s Independence Day Celebration and Fireworks Show July 5th was the talk of the town. People came to Mineral Spring Park throughout the day to enjoy barbecue and other food items and later in the day to hear live music on the park’s Amphitheater Stage. The cruise-in sponsored by the Williamston Fire Department pleased spectators and participants. When the music ended in the park, specatators crossed the street to watch the fireworks which included an exciting build-up led by a local DJ and patriotic music playing during the show. Williamston Mayor Mack Durham said there was great support for the event.

“There was no place to park in the downtown area and people were parking at the high school and walking down,” Mayor Durham said. “It was awesome. Everything went smooth, even the traffic flow.”

Durham said the only complaint he heard was that the food vendors sold out early.

“It was so great having everything in the park,” Durham said. “There was a crowd at the car show and the park, with as many as 50 people lined up to cross the road all afternoon. The band was very good, very entertaining.”

Durham said the car show and music was shut down around 9 p.m. so that people could cross to the ballfields and watch the fireworks.

“The crowd just roared after the fireworks,” he said.

Durham said events like the Independence Day celebration and the downtown music events continue to draw more people to Williamston to enjoy them. He said a large crowd is expected for the next Party in the Park on Aug. 2 and then the town will host the 33rd annual Spring Water Festival, Aug. 22 and 23.