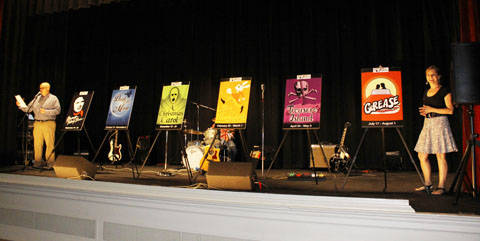 An enthusiastic crowd was on hand at the historic Pelzer Auditorium July 1 for a Launch Party for the Mill Town Players.

Will Ragland, Artistic Director of the new community theater, announced the first season of shows. He said the goal of the theater is to present quality, affordable, live entertainment. The name is appropriate, he said, noting that mill towns played an important part in the area’s history. Pelzer was one of the first mill towns in the Upstate.

The first show, opening Sept. 19, will be Always… Patsy Cline featuring Upstate stage veterans Kristi Parker Byers and Katie Rockwell as Patsy Cline. The show will be held for two weekends. Rockwell’s rockabilly band, Honey and the Hotrods, will also perform in the show. The audience enjoyed music by the band at the announcement event.

Dark of the Moon will be presented on Halloween weekend, Oct. 31- Nov. 2. Ragland said that production will be entered into the SC Theatre Association Community Theatre Festival in Aiken in November.

The next show will be A Christmas Carol and will be held for two weekends, Dec. 12-21.

Open auditions for Dark of the Moon and A Christmas Carol will be held at the same time, on Saturday, Aug. 9, at 10 a.m. in the Pelzer Auditorium.

Alice in Wonderland will be presented two weekends, Feb. 20-March 1. The production will feature live actors and puppets.

Treasure Island will be presented two weekends, Apr. 24-May 3.

The season will end with the popular show Grease, which will be performed three weekends, July 17-Aug. 1.

Ticket prices will be $10 for adults, $8 for seniors and $7 for students. Season tickets will be available for $50. For information check the theater’s website www.milltownplayers.org

Lynn King, a board member and past president of the Mill Town Players, said, “This community theater group in Pelzer is on its way to becoming one of the premier venues in the Southeast. We were thrilled but not surprised at the tremendous turnout of Tuesday’s inaugural season announcement.

“Will Ragland is already well-known and appreciated for his many roles, direction, and sets in area theaters. Beginning a new community theater group in Pelzer has been his dream for a long time, and that dream has begun to come true. We have an excellent board and volunteers, and we expect people in our area to enjoy the efforts of a lot of people, especially Will. He is the most talented person I have ever known, and I’m so proud of him. We are all looking forward to Always, Patsy Cline in September, with exceptional plays to follow.”

Ragland teaches at Woodmont High School and his productions have won state and national awards in the last few years.