South Carolina’s Vietnam War era veterans are invited to a special ceremony at 10 a.m. August 2 in Columbia, honoring their service to our nation. Hosted by U.S. Senator Tim Scott (R-SC), the event will feature keynote speaker Major General James Everett Livingston (ret), United States Marine Corps, custodian of the Medal of Honor, as well as military bands from around South Carolina, and memorabilia and military artifacts from the era.

Each veteran will receive a special Senatorial Certificate of Appreciation, as well as a pin. All interested veterans should register with Senator Scott’s office by phone at 844-820-0146 (toll free).

“The Vietnam War era was one of the most challenging in our nation’s history, and it is truly my honor to host these brave men and women who fought for freedom this year,” Senator Scott said. “Their sacrifices, as well as those made by their families, will never be forgotten, and I look forward to seeing everyone in Columbia on August 2!”

The event will be held at the First Baptist Church of Columbia, 1306 Hampton Street. Attendees are encouraged to arrive at 9 a.m. to enjoy the band and exhibits. 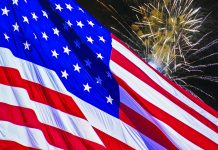