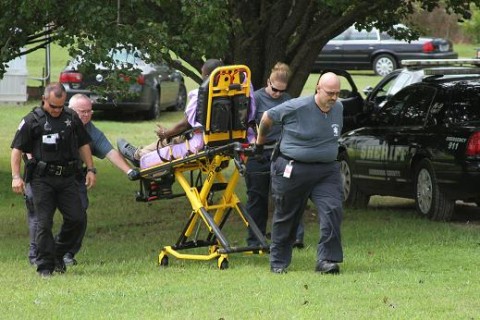 An Anderson County Sheriff’s Deputy and a man that was being placed under arrest were both transported to a local hospital following an incident that occurred on Bell Road in the Cheddar Community on Sunday afternoon.

According to the Anderson County Sheriff’s Office, a deputy responded to 1121 Bell Rd in Belton Sunday regarding a follow-up investigation from a previous call. Once deputies were on scene, contact was made with a male subject who lived at the residence. A short time later, while attempting to place the male subject under arrest, a physical altercation began.

Pictured – EMS responders take the man involved in an altercation with an Anderson County Sheriff’s Deputy to an ambulance . Both the deputy and suspect were transported to AnMed Health by Belton and Williamston EMS. (Photo by David Rogers)