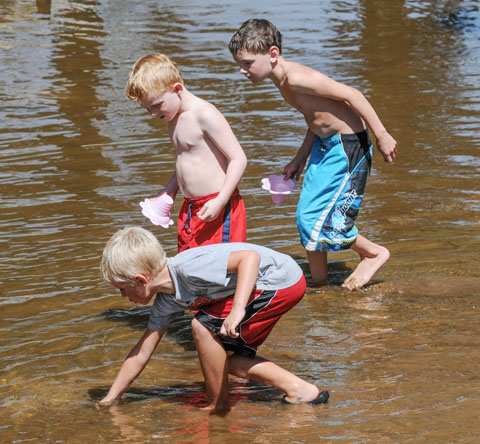 Organizers of the 33rd Annual Spring Water Festival said the event may have broken two records this year. With a high temperature of 96 degrees and a heat index of 105, the festival was one of the hottest in recent memory. That heat in turn affected attendance, which was off considerably. Springwater Committee Chairman David Meade said he estimated that attendance for the festival, which normally ranges from 6000 to 10,000 over two days, was off by about 50 percent.

“The above average temperature and high heat index definitely affected our crowd,” Meade said. “It was extremely hot on Saturday. People were just staying home and staying cool.” Those who did brave the heat and came to the festival enjoyed great entertainment, displays and a variety of items in the craft area, he said. “Most of our crowd came early and there was a steady crowd of visitors throughout the day in the shaded area around the Spring House, food area and the craft area,” Meade said.

Most of those enjoying the live music throughout the day were sitting in the shade. “There were a few who ignored the heat and were dancing,” Meade said.

Craft organizer Beth Watkins said her vendors were pleased with the festival. “A heart-felt thank you to the 46 craft vendors that fought the heat to give us one of the best varieties of crafts we’ve had,” Watkins said. “We had vendors from Alabama to Hendersonville to join our festival this year.”

Watkins said there was a heavy flow of traffic through craft area during the morning and early afternoon. “I know we just had our festival, but I am already planning for next year.”

Watkins agreed the heat affected the festival. “The heat seems to be the one thing that everyone remembers about this year’s festival. “

Watkins thanked fellow committee members for their help. in organizing this years festival and thanked Williamston Councilman Rockey Burgess for putting his own schedule aside to help lay out the lines for the craft vendors.

“The crowd did seem to be off a little this year,” said Restoration Church member Paula Payton. “I assumed the heat had a lot to do with it.” The church was one of several display vendors giving out bottled water.

“We gave out just under 2,000 bottled waters. I think the festival over all was great,” Payton said. “The food vendors I spoke with seemed to be staying busy, but they were hoping for a second wave of people when the main entertainment started at 6 pm.”

That second wave was not what organizers expected. A steady stream of visitors were coming and going for the rest of the evening, but only a small crowd were present for the festival’s headline entertainment.

Nationlly known country singer Lucas Hoge performed songs including “Give a Damn”, “Should Have Loved” and Flip Flops and Bikini Tops.”

“I was very impressed with the performance by Lucas Hoge,” Watkins said. “He is a great singer that really knows how to put on a show. Too bad there weren’t more there to experience it.”

Hoge, who is from Nebraska and now lives in Nashville, said he has recently appeared before crowds in the thousands, but appreciated the smaller crowd who came to hear him at the Spring Water Festival.

The show was only his second time in South Carolina, he said. “You have a beautiful little town,”he said.

Car show organizer Steve Ellison said there were 120 vehicles registered and there may have been more with some not registering.

He also said the heat affected attendance. “The heat was so bad,” he said. “It really affected us.”

Ellison said a lot of visitors were only staying for a short time before leaving to go home to cool off.

Meade said a VW bus display which also offered free themed photos was a hit for visitors. The display was promoting the upcoming Creekside Volkswagen Show Sept. 12 and 13 in Mineral Spring Park.

Approximately 700 to 800 people enjoyed beach music and dancing with the Carolina Coast Band on Friday night.

“Overall it was a great event and we appreciate everyone who came out. We offered something for everyone, from the car show and live music to displays and special events at the Artory, the Spring Water Festival continues to be a great event for the town.”

Meade thanked the Town of Williamston for their support of the festival. “We couldn’t put on this event without the town.”

“This festival will be remembered as one of the hottest,” he said. “We have been blessed with good weather in the past. This year we just missed it by a day or two.”

Cooler temperatures arrived on Sunday and Monday and have continued this week.