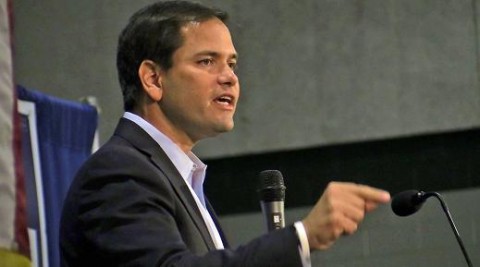 Also on hand were more than three hundred veterans and their families, among the twelve hundred or so who came to feast on pulled pork barbecue and political red meat. The emphasis on patriotism and personal faith was in evidence from the start, as Roy Costner opened the proceedings with the Lord’s Prayer. Earlier this year, Costner tore up his prepared valedictorian’s speech at his graduation, and in defiance of the school’s administration, led his class in reciting the Lord’s Prayer.

State Attorney General Alan Wilson led the crowd in the Pledge of Allegiance, and Commissioner of Agriculture Hugh Weathers delivered a very impressive a capella rendition of the fourth, and little known, verse of the Star Spangled Banner.

The present members of the five branches of the Armed Forces were also recognized, including several WWII veterans. State Senator Kevin Bryant came to the microphone and read the names of all the servicemen from Congressional District Three who have been killed in action since September 11, 2001.

Duncan then called Senator Lindsey Graham to the stage, where he delivered a rousing defense of America and an attack on a Commander in Chief he says doesn’t know what he’s doing. “South Carolina is full of people who pay this nation’s taxes and fight its wars. We are a region of God, guns and guts.”

He also stressed the duty of the nation to care for its veterans. “If you want to continue having a well trained, professional, volunteer military, you darn sure better take care of those who take care of you. Otherwise, the government will soon be drafting your children to fill the ranks.”

He also stressed how crucial a strong America is to world stability. “Marco Rubio knows that. He and I have been very involved in the veterans’ care question lately. Since the atrocious conditions and inexcusable treatment of our vets has come to light recently, we have passed new laws. As of today, a vet who lives more than forty miles from a VA medical facility, or who cannot be scheduled within thirty days, can instead seek treatment at a civilian hospital, with no delay or penalty. And Sen. Rubio virtually singlehandedly added a provision that makes it much easier to fire the incompetent ones.”

Graham said he has never been more worried about the national security of the country, saying that Obama’s gutting of the military at a time of so much global instability is proof that he doesn’t know what he is doing. “We can either rebuild our military so that we can fight these bastards over there, or we can be prepared to fight them over here sooner or later. Because they intend to convert or kill every one of us, and they will do it gladly.”

Governor Nikki Haley followed Graham, and again challenged what she said is the media’s mantra that the American dream is over, gone. She said that not only is the American dream still alive, but that South Carolina has a plan for attaining it.

She boasted that 45 of 46 counties have seen new jobs and industries come. The effects have been dramatic. Since 2011, the state’s unemployment rate has been cut by more than half, from 11.5% to 5.3%; reflecting the creation of 57,000 new jobs and a capital investment of more than $12 billion.

But Haley said that’s not the only way to put people to work. “We used to have an unemployment office that just handed people checks, because the feds told us to. So we told them ‘not so fast. Let’s find out what these people do, or can do.’ So we started talking to them and matching skills with jobs, and we have taken 25,000 people off of unemployment and put them back to work, as proud, productive citizens.”

Congressman Duncan then spoke to the crowd, saying that he and about 35 other Republican Congressmen had met recently to set their work agenda for September. Duncan said he listened patiently as different ideas were offered and discussed. “Finally, he said, his turn came. “I said we needed to stick to three issues. Jobs, energy, and the ideas of our founding fathers.”

“You know, as this president has grown our government, he has created a lot of jobs. The problem is they are all government jobs. As you increase regulation, you create jobs. But those jobs don’t create anything. We need to get the government out of the way so that we can unleash and unbridle the entrepreneurial spirit that has made America the greatest nation and most powerful economy on Earth.”

He added that the pursuit and production of energy produces thousands of jobs, both offshore and onshore. “Energy is a natural segue into job creation. I want to see energy exploration off the East Coast, just as it is off the Gulf and Pacific coasts.

“ Finally, our Founding Fathers understood that government is needed to ensure a certain level of decent behavior, because we are all fallen from grace. As Thomas Jefferson said, if all men were angels, we would need no government. But we aren’t. That doesn’t mean that we need government intruding into every aspect of our lives, however. We need to reduce our government and get back in line with the principles our Founding Fathers established. “

He said that it just so happens that an acronym using the first letter of those various ideas – jobs, energy, and our Founding Fathers – spells out JEFF. “So I told my colleagues that I thought we should have the September of Jeff.”

He then introduced Senator Rubio, who is an acknowledged rising star in the Republican Party, and an oft mentioned potential candidate for the Republican presidential nomination in 2016. As he began to speak, he acknowledged that there were protestors in the room, saying, “I see that we have some demonstrators unrolling their banner over here. Let’s give them a few minutes to get set up. I had hoped they would wait about ten minutes, so I could use the interruption to get a drink of water.”

The demonstrators began to chant various phrases, reflecting their opposition to Rubio’s immigration stance. As soon as the first group were escorted out of the packed hall, another group began, followed by a smaller third group. “Full equality! Right here – right now!” they shouted as they were escorted from the building. Sheriff John Skipper later confirmed that no arrests were made because the demonstrators had quietly left the property when instructed to do so.

Sen. Rubio said he sympathized with the demonstrators, but said that their demands were simply unrealistic. “This country is by far the most generous on the planet in terms of its immigrations policies. Each year, we allow a million people to enter this country. No other country comes close. And all we ask is that you enter legally.” Rubio’s personal history includes his family’s immigration from Cuba to America.

He continued to state that immigration is only one of the challenges we face. “As the world becomes more competitive, we are becoming less so. We may very well be seeing the emergence of

the first American generation who no longer believes that their talents and efforts will take them where they want to go. This not only threatens our economy, it threatens our very identity as Americans.”

Rubio decried the continuing stigma that so many still attach to an education below the level of a college degree. “We need to recognize that many of the best jobs that are available now and will be for the foreseeable future require more than a high school diploma and less than a college degree. Vocational education has never been more important. I would like to see every college be required to inform potential students how much they can expect to make for a degree in their intended field, as opposed to the student loan debt they will incur. Because I can tell you, the market for Greek philosophy majors is pretty flat right now.”

Rubio ended with a call for America to reclaim her place on the world stage. “We have six percent of the world’s population in America, but we have thirty percent of the world’s economic power. We are an extraordinary nation, unlike any other in the world. The fact is simple. This planet is a freer, safer, better place when America is strong. It is time to make her strong again. The last century was an American century, as we shaped the world. It is time for another American century.”