Hundreds of classmates and friends came to Bowman Field in Clemson Tuesday night for a vigil organized on social media for their classmate, Tucker W. Hipps, whose body was found in Lake Hartwell Monday. Hipps was a 2013 graduate of Wren High School where he was on the Principal’s List and a member of the football team.

According to Oconee County Coroner Karl E. Addis, Hipps, 19, of Piedmont, died as the result of a head injury consistent with an unsupported fall. Hipps body was found Monday afternoon in the lake between the two SC 93 (Pendleton Road) bridges which span Seneca River (Lake Hartwell) from Oconee County to Pickens County.

Fraternity members told investigators they were running early Monday morning when Hipps started “having some issues” and fell behind as they crossed a bridge where his body was later found in the water. According to reports, Hipps didn’t show up for breakfast and fraternity members reported him missing at 1:45 Monday.

No ruling has been made on the manner of death, according to Addis who said authorities are awaiting law enforcement investigation and toxicology analysis which could take several weeks. The death incident remains an ongoing death investigation by the Oconee County Sheriff’s Department.

In a news release issued by Anderson School District One, school officials stated they are deeply saddened by the death of former Wren student.

“He was greatly loved by everyone that knew him. Our thoughts and prayers go out to the family and friends of Tucker,” it stated. Superintendent David Havird and the District extend its deepest sympathy to Tucker’s family and friends in this time of loss.

Wren High School Principal Nichole Boseman said, “Even though Tucker graduated in 2013, when students come through Wren High they are part of our family forever. We have very fond memories of him being here. His infectious smile and outgoing personality will forever be remembered. He made a positive impact on the school and community. His involvement with extra-curricular activities like sports and Boys State represents the Hurricane spirit. Our hearts and prayers go out to the Hipps family.”

Jeff Tate, Wren High Athletic Director said, “Tucker was a great teammate on the football team. He had a great personality and will be greatly missed by his former teammates, the faculty and staff of Wren High.”

Hipps fraternity at Clemson University also issued a statement which read: “Sigma Phi Epsilon is saddened to learn about the death of Clemson student Tucker Hipps. Hipps was a sophomore at the university and a member of SigEp’s Clemson chapter.”

It states, “A representative from the Fraternity’s national office arrived at Clemson on Monday evening and is working with the university to ensure that members of the chapter receive the support and counseling they need during this difficult time.”

Fraternity CEO Brian Warren said in a statement Tuesday, “This is a time for mourning, and our hearts and prayers are with the Hipps family.”

The Fraternity is aware of allegations being made through social media that the death was in some way linked to hazing. SigEp has a zero tolerance policy regarding hazing and is currently investigating these claims.

Warren responded to the allegations of hazing saying, “We’ve lost the life of a young man, a life that was taken way too soon. There are a lot of people who are hurting right now, and that’s our number one priority at the moment. But if foul play was involved in any way, Tucker’s fraternity will do everything it can to see that those responsible are brought to justice.”

According to the statement, the national office asked the chapter to suspend all scheduled programming to focus on supporting those close to Tucker Hipps. 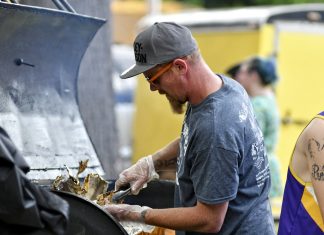