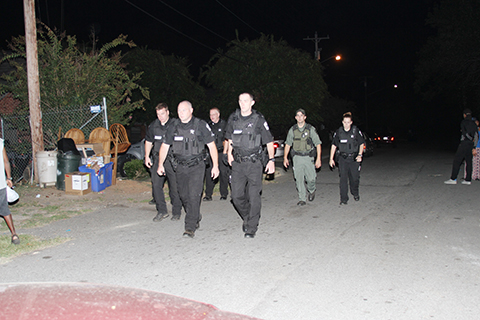 More than a dozen Anderson County deputies along with Williamston police officers responded to an incident on East Carolina Street in Williamston Saturday night involving 40 to 50 people. According to Williamston Police Captain Kevin Marsee, a verbal altercation occurred during a birthday party resulting in a divisive situation between two families. Police were called when a fight broke out between a few of the large number of people attending. Due to poor radio reception in the area, Anderson County Deputies were dispatched and State troopers were summoned as backup but were canceled as the situation was brought under control. There were no injuries or arrests associated with the incident, Capt. Marsee said. (Photo by David Rogers)