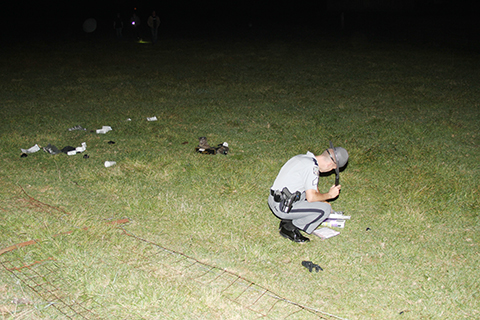 Sgt T. W. Carter with the SC Highway Patrol looks at evidence following a hit and run wreck on Highway 86 Tuesday night. A man waking east toward Piedmont was struck by an eastbound truck at the intersection of Old School House Road. Pelzer EMS rushed the man to Greenville Memorial Hospital where he later died. Wren firefighters also assisted at the scene.(Photo by David Rogers) South Carolina Highway Patrol troopers have arrested Jason Yeargin, 33, of Piedmont, in connection with a fatal hit and run on Hwy. 86 Tuesday night. According to reports, the man who was fatally injured was walking east along SR 86 when he was hit by Yeargin’s Ford F250 pickup. The pickup truck , which was headed in the same direction as the pedestrain, hit the man and then a fence. After the incident, Yeargin left the scene, according to Cpl. Bill Rhyne. The victim’s name had not been released at presstime Wednesday morning.