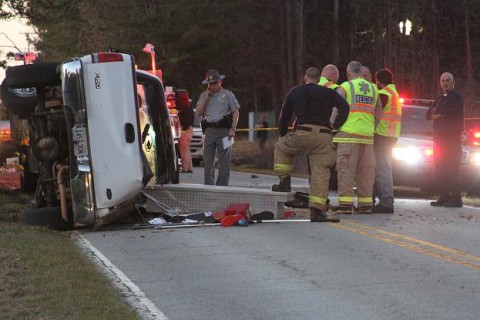 Cpl. B. W. Mayfield talks on his cell phone as he surveys the scene of an accident where a 17 year old Palmetto High School was fatally injured Monday evening. According to Pickens County Coroner Kandy Kelley, Cory Edward Mathis of Belton was a passenger in a Ford pickup truck heading eastbound on Crestview Road when it struck a culvert and overturned. Mathis was partialy ejected from the truck and died at the scene according to the coroner. The 20-year-old driver and two 18-year-old passengers were taken to Greenville Memorial Hospital with unknown injuries. Crestview Road, which is less than one hundred yards from the Anderson County line, was blocked for several hours as troopers conducted their investigation. (Photo by David Rogers)