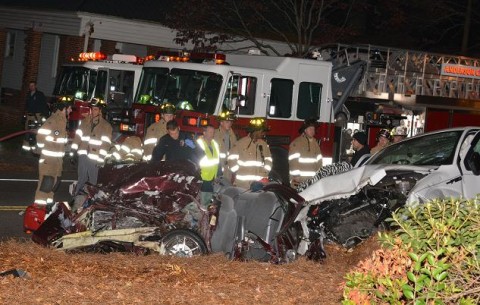 An Anderson University assistant baseball coach, Riley Christopher McDermott, 24, of Davie, Florida, is facing charges of felony DUI resulting in death in connection with an accident in which three people were killed early Saturday morning.

According to police, McDermott was traveling on Williamston Road when the Ford F-150 pickup he was driving crossed the center line and collided head-on with a Nissan Altima at about 12:15 a.m. Saturday morning. The accident happened in front of Anderson University’s Stringer Commons, a new dormitory near the main campus, authorities said. Three people were killed in the accident.

The driver of the Nissan, Corey Austin Simmonds, 22, of Greenville, died at the scene, according to the Anderson County Coroner’s Office. Also killed at the scene was Amber Hope Perkins, 17, of Williamston. Jessica Ann Roberts, 20, of Iva, was extricated from the car and later died at the hospital.

Her sister, Samantha D. Roberts, 17, of Anderson, was had multiple blunt force truama but was in stable condition, according to Anderson County Deputy Coroner Don McCown.

A 12-year-old McCown identified as Perkins’ sister was flown to Greenville Memorial Hospital, where she was in critical condition.

According to authorities, there were two sets of sisters in the Nissan which was headed to a grand-parents home at the time of the crash.

A passenger in the pickup, Ralph Willard Van Nostrand, 28, of Kentucky, had to be extricated from the vehicle and is also in critical condition at AnMed Health, McCown said. Nostrand is an assistant soccer coach at Anderson University, according to the school.

McDermott, the pickup driver, was taken to AnMed Health with non-lifethreateneing injures.

No bond was set after police officers told the judge that McDermott should be considered a flight risk.

McDermott’s permanent residence is in Florida, according to his attorney. He asked that McDermott be allowed to return to Florida. That request was denied.

Anderson County Coroner Greg Shore said blood samples have been sent to the South Carolina Law Enforcement Division. “McDermott did admit to city police officers than he had been drinking,” said Shore.

Public Information Officer Kevin Warren said the crash happened about half a mile from McDermott’s house.

During Monday’s court proceedings it was confirmed that McDermott attended Anderson University, and as worked as an assistant coach of the baseball team for more than two years since graduating. He has since been removed from the online roster.

Barry Ray, Anderson University’s director of marketing and communication, issued the following written statement to “We are deeply saddened by this tragic accident. The concern and prayers of our campus community are focused on the families that have been affected. Because the incident took place close to our campus, we are also making all of the counseling resources of our university immediately available to our students who may need them. We continue to work with law enforcement to learn the facts surrounding this situation.”