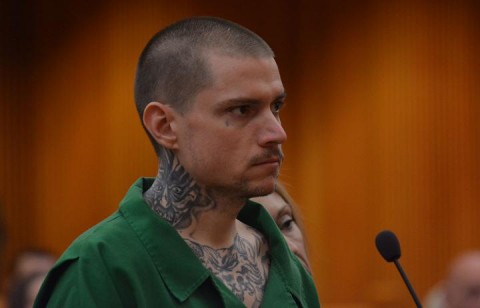 Jared Michael Williams was sentenced to three consecutive life terms Thursday after he pled guilty in Anderson General Sessions Court to charges related to the Pelzer shooting incident in March in which three people were killed.

On March 5, 2014, Williams shot and killed Victor Vandergrift, Hank Eaton and Wanda Anderson while at the home of one of the victims in Pelzer. The defendant fled the scene in a truck belonging to Ms. Anderson. Officers from Anderson County pursued Williams in a high-speed chase which crossed over into Greenville County. Greenville County officers joined in the pursuit. The defendant fired shots at the officers and then abandoned the stolen truck. As he ran from the abandoned truck, Williams approached a woman and her child and demanded the keys. The mother immediately threw herself over her child. The defendant then ran onto a construction site where he stole another truck and fled as officers once again pursued him.

During the pursuit, Williams sideswiped another car and then crashed the truck into a house, knocking it off the foundation. He was then taken into custody.

“Our hearts go out to the family members who lost loved ones as well as those who survived this horrible ordeal,” stated Solicitor Chrissy Adams.

“These crimes most certainly would qualify for the death penalty which is a very long and arduous process. Although their lives have been irreparably damaged by the acts of Jared Williams, the survivors will be able to begin the healing process by the acceptance of the imposition of 3 life sentences.”