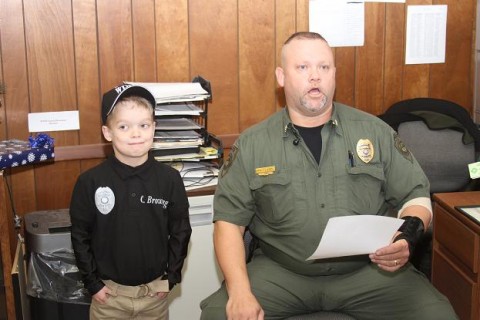 Chief Mike Clardy presented a badge and a certificate to Christopher Browning, Jr., making him an honorary police officer. Browning, a ten year old Cedar Grove third grader, is awaiting a heart transplant. As a classmate of Clardy’s son, Christopher has impressed the Chief, among many others, with his courage and determination.

“Christopher has many of the traits that make a good police officer, and we just wanted to honor him by making him part of our department,” said Clardy. Christopher was in uniform with a shirt and cap during the ceremony, which took place at the department’s annual Christmas party.

Christopher’s parents, Chris and Iris Browning, were on hand and spoke with the Journal about the challenges their family has faced, since Christopher was born with hypoplastic left heart syndrome; a condition that essentially means one half of his heart didn’t develop.

He underwent almost immediate heart surgery on his sixth day of life, and again at six months. His third surgery took place when he was four, and led to another complication; a deficiency in the protein needed for physical growth. As a result, Christopher is considerably smaller than a typical ten year old. The combination of medical circumstances has brought Christopher to the point where a transplant is the only viable option left.

Fortunately, Christopher is near the top of the list for the transplant. Iris Browning says that the difficulty is waiting for the call that says a heart has been obtained for Christopher. “The call could come at any time, day or night. When it does, we have to get to MUSC as fast as we possibly can.”

When that call comes, a new set of problems will come into play. The Brownings can’t stay at the Ronald McDonald’s House at MUSC because they cannot risk any illness or contamination from casual contact with others. So they will have to establish another household in Charleston, while maintaining the one they have here. Christopher’s older brother Kaden will remain here, staying with family members.

The projected cost of living in Charleston as well as maintaining the actual household here for several months will be approximately thirty thousand dollars. It was to address those significant expenses that Chief Clardy got involved in efforts to raise funds for the family. Fortunately, the actual medical costs are covered, so the living expenses are the main problem.

The fundraising efforts have included bake sales, yard sales, a dunking booth, train rides, and various other solicitations. So far, approximately half the money needed has been raised.

Mayor Peggy Paxton had planned to make the presentation, but was grounded by a bug and was unable to attend.

Christopher, who his Dad says wants to be a professional deer hunter, has a more pleasant adventure in his near future as well. The Outdoor Dream Foundation, which grants outdoor adventures to seriously ill or challenged children, will be sending Christopher and his Dad on a deer hunt in Abbeville next weekend. A .308 rifle, and all the camo gear a kid can use, will be provided also. He will also be attending the December 8 taping of the World Wrestling Entertainment (WWE) Monday Night Raw event in Greenville, as guests of the WWE.

Anyone wishing to make a donation to Christopher and his family to help them with the expected expenses can do so at the Sun trust Bank.