Ronnie Gene Wilson, 67, now residing in the Coleman Federal Corrections Institution in Sumterville, Florida, was sentenced Wednesday in federal court in Greenville for his involvement in a conspiracy to obstruct justice, a violation of Title 18, United States Code, Section 371. United States District Judge J. Michelle Childs of Greenville imposed a six-month sentence to be served in addition to the 235 months Wilson is now serving for defrauding almost 800 investors. In total, Wilson is sentenced to 241 months for fraud-related activities.

Evidence presented at the change of plea hearing established that in late 2011 and early 2012, agents with Secret Service and state law enforcement officers began to investigate Atlantic Bullion and Coin and Ronnie Gene Wilson. It was discovered that Wilson operated what is generally described as a “Ponzi scheme.” In April 2012, Wilson confessed to operating the Ponzi.

On April 27, 2012, the United States District Court—with the consent of Wilson and the Government—appointed a Federal Receiver. The Court’s Order directed the Receiver to take immediate possession of all property, assets and estates owned, controlled, used, or in the possession of Wilson.

During the course of the investigation, the Secret Service talked with Wilson on multiple occasions. On or about September 20, 2012, agents interviewed Wilson about possible hidden assets and cash. Wilson was adamant that there were no hidden assets or cash. He stated that he had turned everything over to the Government.

On November 13, 2012 the District Court ordered Wilson to pay approximately $57 million in restitution to the 798 victims of the Ponzi Scheme. He was sentenced to 235 months in prison.

In April 2014, the Government recovered approximately $164,300. This money had been hidden in an ammunition can. Ron Wilson gave this money to a family member to keep for Wilson so he would have something if he was ever released from the Bureau of Prisons.

The evening before Ron Wilson was sentenced in November 2012, evidence established that Ron Wilson visited the hotel room of a family member in Greenville and gave the family member $7000 in cash in an envelope.

In March 2014, Secret Service and the Receiver recovered another ammunition can of money ($172,859). Ron Wilson had given this money to another family member prior to sentencing.

Cassandra Kendall Wilson, age 66, of Woodruff, South Carolina, and Timothy L. Wilson, age 60, of Martin, Tennessee, are both charged in the indictment and have entered pleas of guilty. They will be sentenced at a later date.

The case was investigated by agents of the United States Secret Service. Assistant United States Attorney Bill Watkins of the Greenville office handled the case. 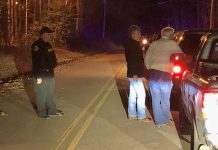