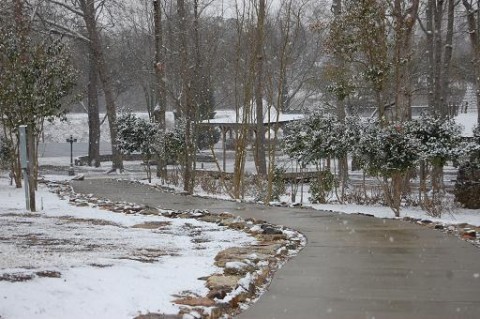 After freezing rain, sleet and ice blanketed the area last week, the upstate finally saw a light snowfall early Tuesday morning. With expected accumulations of less than an inch and snow not sticking on roadways, Anderson School District One was operating on a 2 hour delay while Greenville County Schools were closed.

A Winter Weather Advisory remains in effect until noon Tuesday, when snow is expected to stop and conditions are expected to dry out. However, a Winter Storm Watch is in effect for Wednesday evening. The National Weather Service in Greenville-Spartanburg has issued a Winter Storm Watch for portions of the North Carolina foothills and Piedmont along with upstate South Carolina.

* Hazards… accumulating snow on highways that will cause

* After a lull tonight and Wednesday morning… snow may

redevelop across the foothills and Piedmont of the Carolinas and

* There is the potential for a significant snowfall Wednesday night.

* Impacts… hazardous travel conditions due to snow on highways.

A Winter Weather Advisory for snow means that periods of snow

will cause primarily travel difficulties. Be prepared for snow

covered roads and limited visibilities and use caution while