Anderson County’s recent success in its economic development efforts is well established. A number of businesses and industries have located in the area in recent years, and future growth and development is underway. What sometimes escapes the public awareness, however, is the fact that many of these businesses have located within the boundaries of Anderson School District One, leading to increased tax revenues. In the last six years, more than a half dozen industries have either located in the Piedmont area, or expanded existing facilities. These businesses have created hundreds of jobs.

The recent announcement by the Coca Cola Company that it will be moving its regional headquarters and distribution center from the Mauldin area to a location near the intersection of I-85 and Highway 86 is a perfect example of the impact that will result.

In addition, the taxes that will be collected from the property upon completion will skyrocket from the current $117 to $175,000, according to figures provided by the county’s economic development office.

But Piedmont isn’t the only part of School District One which is experiencing growth. Duke Energy’s proposed upgrade of the Lee Steam Plant to a combined cycle natural gas generating facility will create several hundred construction jobs, and increase the tax base as well.

So successful has the county been in attracting industry in recent years that they actually ran out of existing properties to offer potential clients.

As a result, and under the leadership of County Council District One representative Francis Crowder, the County purchased twenty seven acres in the somewhat dormant Alliance Industrial Park. The county then built a “spec building”, creating a basic shell that could easily be customized to meet a potential occupant’s needs.

The County has since given first reading approval to the sale of ten acres containing that building to a German company which is involved in the automotive industry. It is the company’s first foray into America.

The company purchased the portion of the county’s site for what the county paid for it, and also paid the initial development costs. The company is fast tracking the construction of the facility in order to meet its production schedules. The first goal in terms of job creation is fifty, but both the company and county anticipate steady growth over the coming years.

But there are subtle, and not so subtle, hints that perhaps the biggest and best is yet to come.

Located within a mile of the Alliance Park, at the intersection of I-85 and Highway 81 North is the Betsy Tucker Industrial site, containing more than four hundred acres of unused land.

The site is the county’s largest remaining site with such immediate interstate access, as well as the necessary infrastructure. At the last meeting of the County Council, transportation director Holt Hopkins presented a request that the County agree to the judicial abandonment of portions of two minor and unused roads within that site.

The roads, Wigfall Drive and Furman Road, apparently dissect a large portion of the site.

Hopkins made it clear that the request for abandonment of the roads, which have degraded over the years to essentially one lane gravel tracks, was being requested in order to accommodate the economic development office.

Sources familiar with the site speak very guardedly about the possibility of what is described as “a mega-project” locating at the site in the near future.

The only detail offered is the information that the potential client is not an automotive enterprise. There is no indication of any time line for the announcement, or whether there will be one. 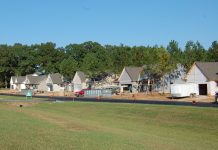