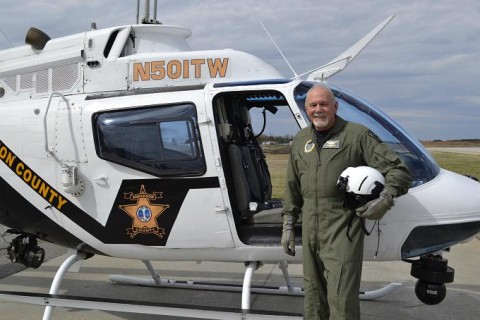 Larry Gilstrap, Chief Pilot for the Anderson County Sheriff’s Office’s Aviation Division, will fly his last assignment on May 14, 2015 when he officially retires from Anderson County.

Gilstrap’s extensive experience with aviation during his years in the army made him the perfect candidate for the Sheriff’s Aviation Division. After graduating from Liberty High School, Larry entered the United States Army and served in Vietnam, Fort Benning (Georgia) and South Korea as a helicopter crew chief. Most of Larry’s experience in the Army was working on UH1H helicopters, also known as Hueys.

In 1977, after his service in the United States Army, Larry started his career in law enforcement at the Pendleton Police Department. After serving in Pendleton, he went on to become a Shift Sergeant at Patrick B. Harris Hospital for five years. Missing the military life, Gilstrap put law enforcement on hold and served full-time in the Army National Guard from 1990 until 2001. Larry retired from the United States Army in 2001 with 20 years of service.

In 2001, Larry re-entered the law enforcement field as a Litter Control Officer with Anderson County Public Safety and was hired, by then Sheriff David Crenshaw, in 2005 as the Chief Pilot and helicopter mechanic for the Sheriff’s Office. Larry has held that title and position for the last 10 years.

Larry Gilstrap was born and raised in Pickens County and has been married to Karen Porter Gilstrap (of Pendleton) for 36 years. They have one daughter, Krystal, who is a dental assistant, and two sons, Alton and Adam. Adam is currently the Police Chief of the Liberty Police Department and Alton manufactures jets for Honda Jet. Larry and Karen also have another love of their life, Mattie, their blonde labradoodle.

A graduate of Tri-County Technical College with an Associate’s Degree in Public Service with a major in Criminal Justice, a graduate of the South Carolina Criminal Justice Academy, recipient of the Crew Chief of the Month for the 1st Calvary Division of the US Army and numerous other distinguished awards throughout his career, Larry is not giving up flying entirely. Though he intends to fully enjoy retirement life with his wife, Larry has decided to keep his pilot’s license current and has agreed to assist the Anderson County Sheriff’s Office’s Aviation Division in the event he is ever needed.