That’s right. The Williamston Journal is sixty years old this week. That is a remarkable achievement, especially in today’s world of swirling media and social media and a stream of information unprecedented in human history.

We have had our moments of disagreement over specific issues and specific stories. But we have always shared a common belief that the mission of a newspaper, no matter how grand, or how small, is to tell the truth about the events that affect people’s day to day lives.

If a newspaper does that, consistently and with a commitment to the community served, one day sixty years have passed, and you discover that your newspaper has actually recorded the history of your town. In the case of David and Richard Meade, their newspaper has basically recorded their own lives’ histories. They grew up in the business; and like myself, are no longer fit for honest work.

When Bill Meade bought the Journal, lo’ those many years ago, it was a different world. Certainly the technology used today was unheard of, even unimagined in that time. But it was different in other ways as well. The very world itself was larger. The time needed for news to travel from Europe or Asia or Russia, even in the post war era, was still measured in hours, and not seconds.

Values were different. Morality was drawn in much starker and clearer lines, especially in a conservative area like Upstate South Carolina. The challenges of producing a relevant and newsworthy paper have increased as the years have passed; but the Journal has always strived to meet those challenges.

There is a magic in a newspaper that the internet and all the digital hoopla cannot equal. After more than thirty years, I still love to stand and watch the web press hum and rattle and turn rolls of blank newsprint into pages of words and pictures and color. It has never grown old, and I suspect it never will.

There are a lot of people who have to do their job to produce, print, distribute and deliver a weekly newspaper. The production staff here is a good one, capable of excellent work and constant griping at the same time. If a production crew ain’t griping, something is wrong. I pride myself on giving them something to gripe about each week. My ineptitude as a photographer is usually enough, but if needed I can rise to the occasion with something special.

When I moved to Anderson County ten years ago, it was a bit of a shock to me. I’m sure in the years since, I’ve been a bit of a shock to many of you. But as I write this column, on the sixtieth birthday of what I consider to be one of the better weekly papers I have worked for, or seen in recent years, I am struck by the good fortune that brought me to this desk, and to the opportunity to publish my work under the banner of such a fine local newspaper.

Editor’s Note: “April Fools” The Journal Birthday is now and probably will forever be known to be on April 1. Stan and the world knows this because it is on “Facebook”. But as many of you know, just because it is on Facebook or the internet, it may not necessarily be one hundred percent true. As a funny note, and not intentional, the April 1 birthday date is sort of an internet funny and April Fools joke.

You see, when our graphics department set up our “Facebook Page” profile, it required a “birthdate”. Well our staff knew the first edition of The Journal was published in 1955, but were unsure about the exact date, and since it was April 1 that day, April 1 was put in to save time, and if not actually accurate, could be explained as an “April Fools” day joke.

But it is close. The first issue of The Journal was published in 1955. Edward Wills, original publisher of The Journal, moved printing equipment into what was known as the Attaway Building on Mill St., on May 1, 1955. The building was located behind Grace United Methodist Church.

At that time, Wills was probably working on publishing the very first issue/edition of The Journal, which was actually printed in July of that year.

So April 1 is a bit premature, but we’ll celebrate anyway!

“Thank You to all our readers and advertisers for your support of and for being a part of The Journal for 60 years!”

– David Meade, Managing Editor/co-publisher; Richard Meade, Production Manager/co-publisher and everyone at The Journal 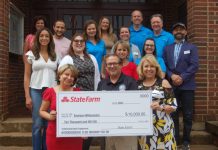