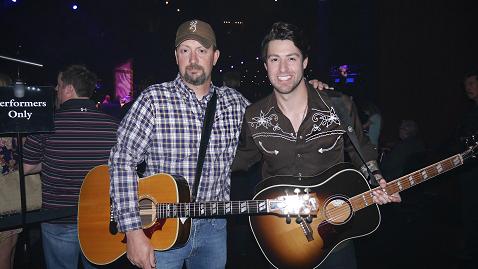 Country music singer/songwriter Austin Webb knows how important it is to never forget your roots. Webb, formerly of Williamston and now of Nashville, is on the Billboard Country Airplay charts and is getting national radio attention with his latest single, “All Country on You.”

Since moving to Nashville in 2011, Webb has had the opportunity to perform on the Grand Ole Opry Stage several times, and when he has, he remembers that “where we come from is the best way to understand where we are going.”

Webb performed for the fourth time on the hallowed Opry Stage on April 25 and this time he brought along his childhood mentor and friend, Jason Watson.

Jason Watson is the father of the lead guitarist Tyler Watson from Webb’s childhood band called Sweet August. The band was formed when Webb was 14-years old and Webb was the lead singer. He wanted to learn how to play guitar, so Tyler’s father, Jason Watson, offered to teach him guitar chords.

Webb explains, “He had a small studio set up in his house in Pelzer, SC. I was finally able to accompany my lyrics with music from the chords I learned from Jason. I would visit Jason’s house weekly, sometimes daily after school to record my songs on his studio set up even when Tyler wasn’t there late into the night. My first recorded music was in that small room in Pelzer.”

Webb was very aware of Watson’s dream of living in Nashville, TN and becoming a professional songwriter and ultimately performing on the Grand Ole Opry one day. When Webb got the offer to perform this past Saturday, he reached out to Watson.

“Asking him (Jason) to join me on the Opry stage was the best way I could thank him for all the help he gave me early in my career,” explains Webb. “It’s very important to me to remember my roots . I love my hometown of Williamston, South Carolina and I respect where I come from. It warms my soul that I have the opportunity to give back to my friends and my community.”

This isn’t the first time Webb has had someone from his past play with him on the Opry. He also invited Will Clardy, who played bass and guitar on his first solo project. Austin Webb is currently signed to Streamsound Records co-owned by Grammy-winner Byron Gallimore.

Webb will be performing near his hometown of Williamston on May 8, at The Fair at Heritage Park in Simpsonville. For more information on Austin Webb, visit www.austinwebb.com