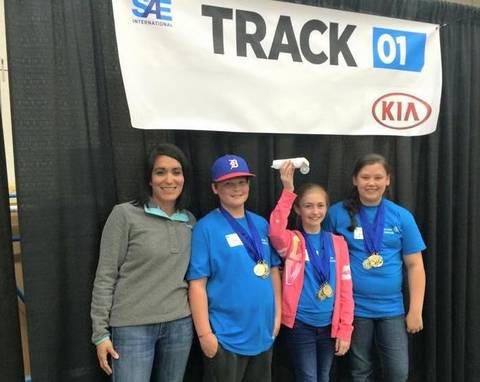 During their regular monthly meeting Tuesday, the Anderson School District One Board of Trustees approved a large number of personnel and held their first budget work session in preparation for the 2015-2016 school year. The Board also recognized the Cedar Grove Razor Rockets STEM program team for their first place win in the international jet toy competition last week in Detroit

The Cedar Grove Elementary Razor Rockets won the International JetToy Competition, where they competed against more than 500 students from all over the world. Team members included fifth grade students: Olivia Cabaniss, Taylor Berry and Chloe Branyon.

Administrators Kristie Finley and Jeffrey Simpson and teacher Kristy Smith attended the event along with some parents.

The JetToy Challenge offers students, teachers and volunteers who have participated in A World in Motion – JetToy Challenge an opportunity to come together and share what they have learned through their experience.

It is set up as a friendly competition where students (in Engineering Design Teams of 4) compete in distance, accuracy, weight carrying and timed events.

The teams design and construct a small toy vehicle on site for the competition which includes distance, weight, accuracy and time.

The students came in second in regional competition and spend numerous hours after school working on perfecting their design, Smith said.

Jane Harrison, Assistant Superintendent for Curriculum, reported testing is underway in District One schools this week and next.

She reported on the success of the Read to Succeed program which involves reading coaches for students.

Harrison said the state has become more involved in intervention for students and is training all teachers on intervention in the classroom.

In the past, students needing assistance have been pulled out of the classroom for individual assistance.

“It is becoming our job to teach where those student are,” Harrison said.

She also said there will be a summer reading camp offered at Spearman Elementary this year.

The District will provide bus transportation with mileage assistance from the state, she said.

Two camps will be offered, the first for three weeks after school ends for the summer and the second three weeks prior to classes in the fall.

The board unanimously approved a contract for Chambers Grading for construction of a new athletic practice field at Powdersville Middle School. Cost for the project is $367,453.10.

The board also unanimously approved the nomination of Dr. Doug Atkins to serve as the Region 11 SC School Board Association Director. The appointment is pending the SCSBA election.

The board also approved a number of personnel. (See separate story)

A budget work session was held after the regular meeting.