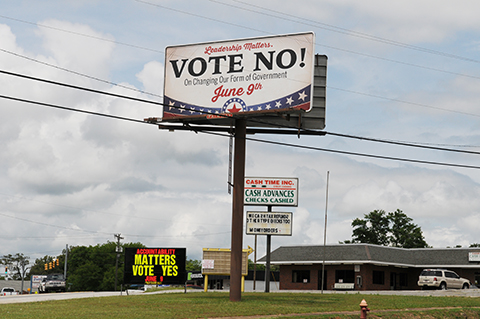 Note: This article contains excerpts from a prepared statement provided by Williamston Town Councilman Rockey Burgess. Space restrictions prevent running the entire statement, but passages used in reference to the issues raised in this article are produced verbatim, and will appear in quotation marks and italics.

The June 9 referendum on whether the town of Williamston will continue to operate under the strong mayor form of government has been an issue of considerable debate.

Recently the placement of a billboard, and then a temporary (portable) political sign in response, has inflamed passions and tested the town’s new sign ordinance.

The billboard, rented by a private citizen, is located across from BB&T bank on East Main Street.

The billboard bears the message “Leadership matters” and encourages voters to vote against the change in the town’s form of government on June 9.

The 10×6 temporary political sign was placed at the car wash property practically under the billboard and bears the message “Accountability matters.” It urges voters to support the change in the form of government.

Soon after the billboard appeared, Burgess, who has also been spearheading the effort to change the form of government, went to city hall and applied for a permit to place a temporary sign at that same location, which he described as “political.”

In his statement, Burgess said he did pay for and obtain a political sign permit for a yard sign.

Burgess suggested that The Journal check to see if the “no side”, as he described the opposition, had paid their fees for the yard signs they had put out.

They had, putting down a $100 deposit, just like Burgess. The deposit is designed to insure that the signs are picked up in a timely manner. If they are retrieved within a week, the deposit is refunded.

Town employees stated to The Journal that they returned the permit application because it was incomplete. They said that Burgess described the sign as political, which brings certain aspects of the town’s sign ordinance into play.

Burgess, in a telephone interview with The Journal, stated that he meant the nature of the sign was political, not that it met the criteria for a political sign as defined by the ordinance.

“Nobody would argue that the content is political,” he said. “That’s obvious.”

Burgess challenges the position taken by the town and explained why in his statement:

“The supporters of the change in government (myself included) decided to have a sign placed. I filled out the temporary sign permit application along with the $15 fee and submitted it to the town. I received a phone call stating that the 10′ x 6′ sign was not a temporary sign but rather a political sign. Under our ordinance, a political sign is regulated to 4′ x 4′ or 16 square feet and in the ordinance, a “political sign” is defined as: “signs erected in conjunction with elections or political campaigns” – Section 90-194. There is no election or political campaign…there is a referendum.

Legal definition of an election is: “a formal decision-making process by which a population chooses an individual to hold public office.” This definition does not fit the sign that I tried to pull a permit for…there is no election, rather there is a referendum.

Legal definition of a political campaign is: “a  race  between  candidates for elective office” Again, this definition does not fit the sign that I tried to pull a permit for…there is no election between candidates, rather there is a referendum.”

A referendum is described as an event in which the people of a county, state, etc., vote for or against a law that deals with a specific issue : a public vote on a particular issue.

Section 90-194 (4) of the town’s sign ordinance does addresssigns erected in connection with elections or political campaigns.

According to online free encyclopedia Wikipedia, a political campaign is an organized effort which seeks to influence the decision making process within a specific group. In democracies, political campaigns often refer to electoral campaigns, wherein representatives are chosen or referendums are decided.

A political campaign is also defined as a series of actions advancing a principle or tending toward a particular end.

(Editor’s note: None of the above definitions are contained in the sign ordinance)

One of the requirements cited by town employees for a temporary sign is that the owner of the property where the sign will be placed must grant permission. There is a place on the permit application for that signature.

In a telephone interview, Councilman Burgess denied that the permission has to be granted in writing, and claimed that he had the owner’s permission.

No proof of that was provided to the town employees who processed the permit application, thereby leading them to return it for completion.

A review of section 90-194, sub paragraph 4, which deals with political signs, reveals no expressed requirement for written permission.

The distinction between a political and a temporary sign is crucial. A political sign is limited in size to a four foot by four foot size, while the sign placed by Burgess is a ten foot by six foot free standing sign.

Perhaps the more critical issue is that the sign is portable, of the kind often placed in front of stores for sales and special events, which are allowed under the ordinance. It can be transported on a trailer or in a truck bed.

It states simply “Portable signs are prohibited in the Town. Signs must be permanently attached to the ground or on the building which it serves. Portable signs located on vehicles are not permitted.

“Sub paragraph 4b goes into further detail on what constitutes a portable sign, but it only reinforces the above paragraph; it offers no exceptions.

Burgess’s written statement makes no reference to this part of the ordinance.

In a telephone interview, however, he said, “There are four or five of those signs around town, but nobody’s said anything about them.”

Burgess, in his statement, framed the issue in terms of free speech.

Complicating the issue further is Burgess’s status on the legislative review board for the Town.

In his position, Burgess was intricately involved in the final product that was given approval by the full Council last December, and which was implemented on January 1 of this year.

He also represented the Town Council in meetings with the planning advisory board, which also had significant input into the sign ordinance.

Jim Simpson, local businessman and member of that board, said that the board had been very specific in the definitions of political and temporary signs.

“We wanted to give local businesses as much flexibility as possible. So that they could place extra signage for special events or sales or things of that nature.”

When asked about the current situation, Simpson said that since the sign takes a position in support of the change, he would deem it political. “Obviously there is a loophole we failed to anticipate. I guess we will have to revisit the ordinance.”

Burgess conceded that, “We may have to do a little leg work on the ordinance. We’ll see.”

Burgess’s statement concludes with his assertion that –

“If law enforcement can articulate that I have violated any ordinance, state, or federal law then I am sure that they would have issued me a summons or a warrant for my arrest would have been issued.”

Williamston Police Chief Tony Taylor told The Journal that his department would not address the issue unless the planning commission ruled the sign did not meet the requirements of the town’s sign ordinance.

At present the temporary portable political sign placed on East Main St. by Burgess is not permitted by the town.

A formal complaint has been filed in reference to the sign and the issue is expected to go before the town’s planning commission for a recommendation, however no date has been set as of today (Wednesday).

Planning Commission Chairman Marion Middleton Jr. stated that the issue has not been refered to them for review and a recommendation but does expect that to happen. He said in preparation he has sent a copy of the town’s sign ordinance to each member of the commission.

If the planning commission does determine there is a problem in the wording of the ordinance as it relates to the current situation, Middleton said they will address necessary changes and make a recommendation to the town.

Otherwise the issue may have to be addressed by the town attorney.

Related Change in form of Government