During their regular monthly meeting Tuesday, Anderson School District One Board of Trustees approved a slightly revised budget, heard a report on the digitial innovation program and approved personnel for the 2015-16 school year.

During his superintendent’s report, David Havird reported the district has 26 CDs with interest rates from 1.25 percent to 5.4 percent and the district is expecting to receive $95,000 in interest for the year. The district has $4,393,000 currently invested in the various CDs.

The food services department has $398,000 invested in CDs and is expecting $8,000 in interest this year.

Financial Director Travis Thomas reported the district is ahead with ad-valorum and local tax collections at 97 percent and 94 percent. Total revenues collected are at 89 percent. He also reported the district went up on the weighted pupil units by 6 to 7 based on the 135 day enrollment, however the state capped the base student cost at $2100.65 instead of the proposed $2109, which will result in a loss of $97,000 from what was being budgeted.

Expenses are at 85 percent. Thomas said the district has two more payrolls, for June and July.

Auditors are currently working on the district finances and will make their annual audit report in October.

Jane Harrison, Assistant Superintendent for Curriculum, reported the testing is almost completed in District One.

She also reported on the digital innovation program which she said is moving from the discovery stage to the transform stage. “We are looking at new ways to transform instruction,” she said.

The district will offer 100 sessions for teachers during an upcoming conference and is looking at new ELA, math and science objectives as part of the student learning initiative.

Harrison said representatives of District One will present information on the successes of the digital innovation program to other schools at the state summer conference.

District One is ahead of most in the state on the use of technology with the introduction of 8000 IPads into classrooms at the beginning of the 2014-15 school year.

A short video presentation featured students commenting on their use of the technology and thanking the board for allowing them to have it.

Harrison reported there were some minor mishaps with cords being lost and only two IPads being lost.

“The IPad was the most valuable item they had, particularly at the middle schools,” Havird said. He also said it was “one challenging project, managing 8000 IPads this year in addition to the projects and instruction.”

Assistant Superintendent for Adminstration Robbie Binicker reported student nutrition services had an unexpected $32,000 cost to process commodities this year but will still contribute $95,000 to the general fund for salaries and benefits and $136,000 back to cover indirect costs.

He recommended that the district consider a 10 cents increase in the cost of breakfast and lunch for students in the coming year. Binnicker said it has been ten years since District One increased prices.

There was a brief discussion about where board members will park and enter the Bons Secours Wellness Arena for the three District One graduation ceremonies being held there Thursday.

COVID numbers coming down in Anderson School District One 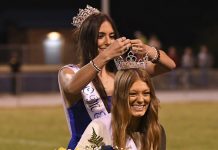