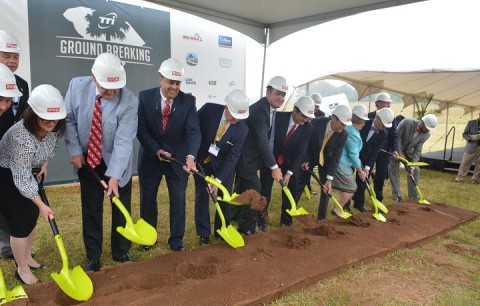 A crowd of well over a hundred people were on hand last Thursday, for the groundbreaking ceremony for the new Techtronic Industries facility near the intersection of Highway 81 and I-85.

Also on hand were representatives from the offices of the state’s two U.S. Senators, Congressman Jeff Duncan, and Governor Nikki Haley. All of them sent messages of encouragement and appreciation for TTI’s decision to locate their new logistics and distribution center at the Betsy Tucker industrial site, instead of in one of the several states and foreign countries that tried to woo them.

TTI, which manufactures a variety of product lines, including Milwaukee, Homelite and Ryobi power tools, and Oreck, Hoover and Dirt Devil vacuum cleaners, employs more than twenty thousand people worldwide, and does more than five billion dollars in annual sales. Joe Galli, Jr., CEO of the corporation, explained that TTI, which was founded in 1985, located in Anderson back in 2000; but he traced the company’s history in Anderson all the way back to 1933, when Singer Sewing Machines, which was later absorbed by Ryobi, first located here.

He added that the company currently employs fourteen hundred people in the county, and will increase that number by at least two hundred more when the new facility is finished. described the planned facility as a showcase facility, which will include one point four million square feet.

He called TTI’s decision to remain in Anderson a “massive decision for the company. It guarantees that TTI and Anderson County will continue their excellent relationship for decades to come.” He explained that the company’s global research and development division will be located at the new site as well.

Construction is expected to start soon, and the facility should be up and running by the summer of 2016.