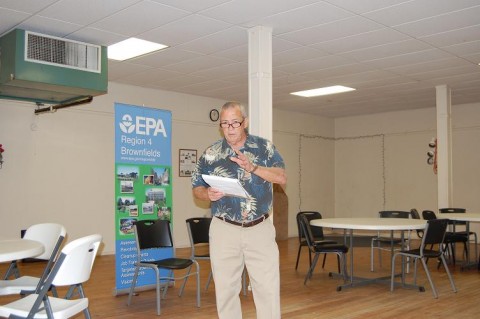 County and state officials were on hand, as well as representatives from Senator Lindsey Graham and Congressman Jeff Duncan’s offices. Representing the Environmental Protection Administration, and presenting the check, was Barbara Alfano, the Region Four Brownfields Coordinator for the EPA.

The Pelzer Heritage Commission is one of three recipients in South Carolina that the U.S. Environmental Protection Agency (EPA) is awarding with Brownfields grants to help redevelop former contaminated industrial sites.

The two EPA grants awarded to Pelzer Heritage Commission, totaling $400,000, will be for cleanup of the former Pelzer Mill dump site on the Saluda River.

Coverage of the presentation including comments and photos will be in the July 8 edition of The Journal.

Pelzer Heritage is also partnering with Anderson County for grant funding through the S.C. Housing under the Neighborhood Initiative Program (NIP).

The NIP is designed to help stabilize property values and prevent future foreclosures for existing property owners in strategically targeted areas through the removal of blighted structures. The Pelzer Heritage Commission will be working with Anderson County on the NIP as a non-profit partner.

Just this week Anderson County was notified that the county has received approval for up to $2,496,284 in funding from the NIP. Funds will be used to demolish and green substandard and blighted residential properties in eleven target areas throughout the County including Pelzer.